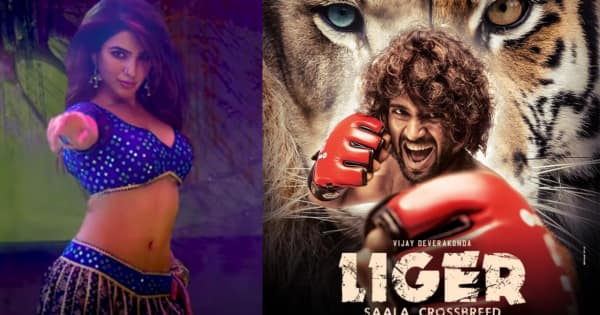 Samantha Ruth Prabhu is in demand after the super success of Oo Antava in Allu Arjun and Rashmika Mandanna starrer Pushpa. The actress has reportedly been approached by the makers of Liger for an item number. Yes, you read that right. A report in Telugu 360 says that the makers of Prabhu Vijay Deverakonda and Ananya Panday starrer are also planning a peppy dance track for the film. The report states that Puri Jagannadh, the director of Liger is on a hunt for an actress who’d set the screens on fire alongside Vijay Deverakonda. – Pushpa fever: Cricketer David Warner’s daughters dance on Rashmika Mandanna’s song Saami Saami; Allu Arjun reacts – watch

The report states that the filmmaker is keen on casting an actress who has never been seen before in an item song. It is said that a couple of Bollywood actresses are also being considered for the same since Liger is a pan-India project. Well, after the super success of Oo Antava, Samantha can be one of the leading names, don’t you think? The actress with her special song number in Pushpa brought back the craze of dance numbers in films. Whether or not Samantha will be seen in another item number remains to be confirmed. But we are sure that her fans who enjoyed Oo Antava would love to see more of the sizzling side of Samantha. – Kareena Kapoor Khan, Samantha Ruth Prabhu and more actresses whose bold and intimate scenes raised eyebrows

Talking about the Pushpa track, the video has been widely shared across. Reels are being made on the hit track that is choreographed by none other than ace Bollywood choreographer Ganesh Acharya. Oo Antava is composed by Devi Sri Prasad while the happening vocals are provided by Indravathi Chauhan. Reports state that Samantha charged about Rs 5 crore for the song. – Ayushmann Khurrana’s next after Chandigarh Kare Aashiqui headed straight to OTT? Here’s what we know [EXCUSIVE]

Coming back to Liger, the sports action film, it is scheduled for a 25 August release. Liger is jointly bankrolled by Puri Connects and Dharma Productions. It reportedly also stars Ronit Roy, Ramya Krishna and Mike Tyson.