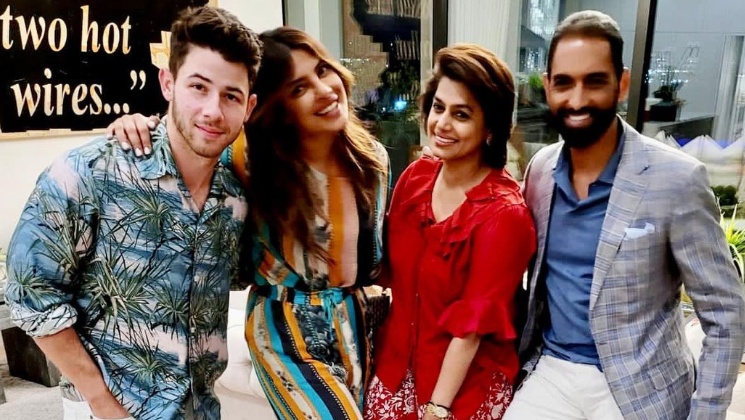 Priyanka Chopra Jonas is currently in the US, spending time with her husband Nick Jonas and family. The actress constantly keeps sharing pictures and videos from her time in the US. She is often clicked as she heads out with Nick for lunches and dinners. While Priyanka Chopra is at her Los Angeles home, she and Nick Jonas hosted their friends at their humble abode. The couple was clicked posing for a photo with their friends. The photo from Nick and Priyanka’s time together with friends has surfaced on the internet.

The Jee Le Zaraa actress hosted philanthropist and entrepreneur, Pinky Reddy for dinner at their Los Angeles home. Pinky was the one who took to her Instagram to share a picture from the intimate dinner. Taking to her Instagram, Reddy shared the photo and wrote, “It was lovely to meet @priyankachopra @nickjonas in there beautiful home in Los angles for dinner #friendsforever #greathosts,

In the picture, Priyanka is clicked wearing a multicolored jumpsuit. Nick, on the other hand, is clicked in casual attire. Chopra looks happiest as she flashes smiles for the photo.

Take a look at the photo below:

Earlier, on Easter Sunday, the actress had shared a string of photos of her from her time with Nick. The couple celebrated the joyous festival of Easter with friends and family. Priyanka shared photos of her and Nick together. The couple also went on to enjoy a day at the beach. The actress had shared mushy photos with Nick from her time at the beach.

Meanwhile, on the work front, Priyanka has the movie Jee Le Zaraa in her kitty. The movie also stars Katrina Kaif and Alia Bhatt. She even has the movie It’s All Coming Back To Me with Sam Heughan and Celine Dion, which is scheduled to release soon. The actress also has Russo Brothers’ Citadel with Game Of Thrones star Richard Madden.

: Priyanka Chopra enjoys the wind in her hair as she heads out for a long drive on Sunday