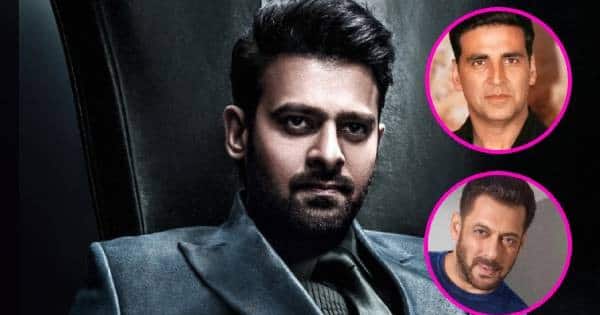 Prabhas is one of the most appealing and massy stars from the South who has a pan-India fanbase. The actor is the most sought-after celebs in the industry. Noted producers all across the globe are chasing the Baahubali star for films. He will be next seen in Radhe Shyam. The period sci-fi romance drama film also stars Pooja Hegde in the lead. Prabhas also has some big budgets films including Adipurush, Salaar to name a few. And interestingly, all of his films are produced by Bhushan Kumar. And with that, Prabhas has entered the big league. He has joined superstars Salman Khan and Akshay Kumar’s league of charging a whopping Rs 100 crore plus for a film. Yes, you read that right. – #19yearsforPrabhas: 5 films rejected by Prabhas that became high points of Allu Arjun, Mahesh Babu and other stars’ careers

A report in Bollywood Hungama read said the producer Bhushan Kumar opted for a massy star with a Pan-India appeal rather than seeking out Bollywood stars. Hence, he has been producing several films that feature Prabhas in the lead. Furthermore, the report said that Prabhas’ presence gives him and his tea, the liberty to not worry about the budget. “He is supremely excited to take things to the next level with Radhe Shyam, Adipurush and Spirit,” a source close to the filmmaker said. – #19YearsForPrabhas: Fans give a hilarious twist to the trend; connect it with ‘Single’s Day’ – view tweets

Working with Prabhas has now become a matter of prestige. His unparallel stardom gives the filmmakers the liberty to make films without worrying about the budget. The report said that Prabhas has allegedly charged Rs 150 crore for Sandeep Reddy Vanga’s Spirit. And it is said that Prabhas is getting Rs 150 crore for Adipurush as well. He is now the third actor after Salman Khan and Akshay Kumar to have charged Rs 100 crore plus for a film. Akshay reportedly started charging Rs 100 crore from Bell Bottom. On the other hand, Salman Khan reported charged Rs 100 crore plus for Sultan and Tiger Zinda Hai. – Happy Birthday, Prabhas: From Radhe Shyam to Spirit – The Baahubali star to shatter records with these pan-India biggies