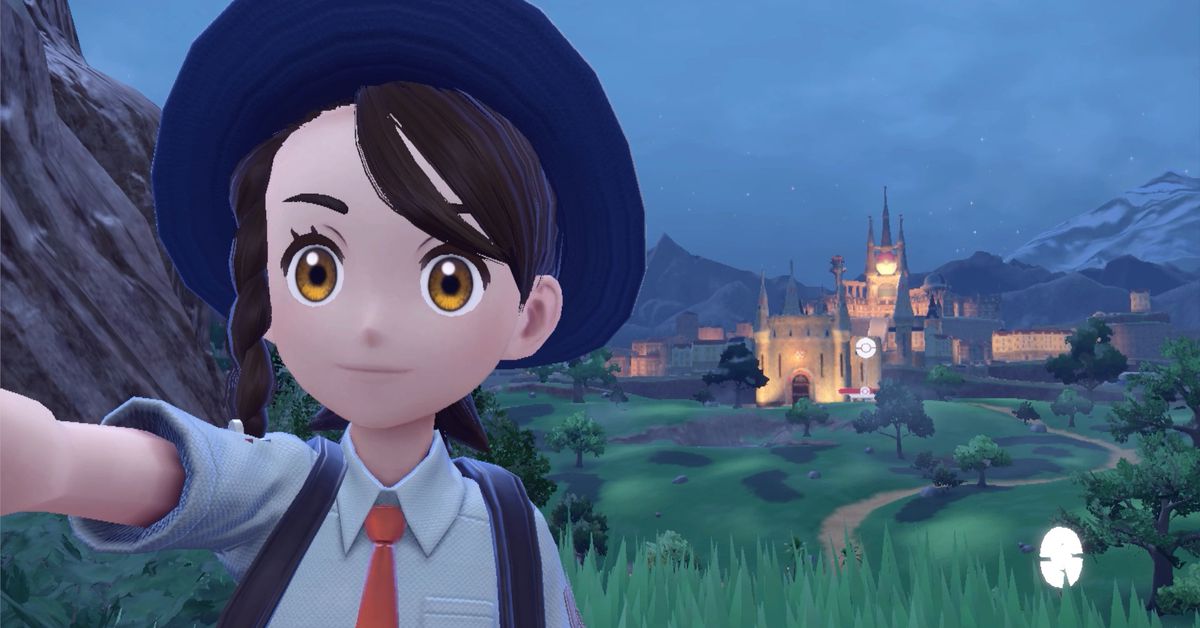 If you ask a room full of Pokémon fans what the best generation of games is and why, you’ll receive as many different answers as there are pocket monsters. But when people talk about why they love Gold, Silver, Crystal, and their Nintendo DS remakes so much, what they’re usually thinking about is how expansive and immersive those games felt — both because of their (at the time) massive pokédexes and because of how they allowed you to travel to more than one region. Though Pokémon Scarlet and Violet are set entirely in the new Paldea region, those were some of the feelings I experienced recently while spending a couple hours playing a prerelease build of the games ahead of their launch next month.

Between Pokémon Sword and Shield’s wild area and Pokémon Legends: Arceus’ sprawling, traverse-friendly Hisuian wilderness, Game Freak and Nintendo’s plan to release a truly open-world game à la Breath of the Wild has become much clearer in recent years. Imperfect as Pokémon Scarlet’s immediate predecessors have been, as I first released my Koraidon from its pokéball to take the feral dragon-cycle for a test ride, it immediately felt like I was at home and knew where I was going.

Some of that was because of how much emphasis recent games in the franchise have put on the dream of just wandering around outside with your monster friends. But the bigger reason that Pokémon Scarlet and Violet are going to feel like breaths of fresh air to longtime Pokémon fans has much more to do with how swift the new vehicular legendaries are and how almost every inch of the humongous Paldea region was designed to be explored.

Scarlet and Violet aren’t the first Pokémon games to feature rideable pokémon by a long shot, but unlike the transportation monsters of previous generations, Koraidon and its futuristic counterpart Miraidon move with a nimble fluidity that feels like a massive upgrade from Arceus especially. Koraidon and Miraidon’s four distinct forms eliminate the need to hot swap between different kinds of pokémon in order to traverse different kinds of land, which in turn, has the effect of making Paldea feel like a more cohesive, well thought out place that’s worth spending time poring over in search of treasure and rare ‘mons.

But instead of completely eschewing the stealth mechanic that helped make Arceus feel like an exciting new twist on the franchise, Scarlet and Violet bring it back slightly differently. Sneaking up on wild pokémon in tall grass and throwing one of your battlers at them from behind gives you a strategic advantage in battles. While my demo team was already artificially strong enough to plow through the handful of Houndour, Zangoose, and Lechonk I encountered, it’s easy to see how players will be able to use the game’s stealth-based move priority to their advantage when leveling up and targeting specific wild pokémon.

While Scarlet and Violet are going to make you work a little bit harder (read: watch some more animations) to fill up their snazzy new take on the pokédex in place of Arceus’ battle-free catching mechanic, the new games also introduce a more casual kind of “Auto Battle.” As you’re journeying across Paldea, Scarlet and Violet allow you to travel with one of your pokémon outside of its ball that, in addition to being cute and walking with you, will periodically run off to pick fights with wild pokémon that are animated, kind of like tussling cartoons that turn into clouds of punching fists.

Instead of the outcomes of these battles being determined by how you — the player — fight, the victor’s decided based on a mix of factors, including which pokémon’s more powerful in terms of its level and which of them has a type advantage working in its favor. Again, because my pokémon were all relatively strong to begin with, I didn’t get a chance to see what happens when your buddy pokémon tries to fight a wild pokémon and ends up getting walloped for its hubris. But I did get to witness my Armarouge mess up a wild Lechonk and bring me back some of its foe’s fur, which was very gross, very cool, and very useful because of how the fur and other resources can be used to create Technical Machines (TMs) in these games.

Instead of catching multiples of pokémon as you attempt to help create one of the first pokédexes as a student at either Naranja or Uva Academy, you’re working to build out your personal library of books about pokémon that grows every time you manage to get one to stay inside a pokéball. It’s a very small detail, but the way catching a new species of pokémon is followed up by a zippy animation of a book with that monster spinning into view before slotting itself onto a shelf is beyond satisfying, and the variation in book covers made me want to go out and really focus on completing the pokédex.

Of course, there wasn’t anywhere near enough time to do that both because this pokédex is going to be… sizable, let’s say, and because I wanted to see what taking on a proper gym leader and the region’s Star-themed gang was like. Though Brassius, the Grass-type specialist gym leader of Artazon city, was easy enough to take down with a few Fire-types, completing the Gym Test before he would agree to battle me proved to be a bit of a challenge due to time constraints. Hopping on Koraidon to find a bunch of Sunflora “hiding” around the city within a time limit wasn’t hard, per se, but because so much of the terrain and buildings are climbable, I was inclined to waste seconds just in the off chance that the monsters might be tucked away somewhere more unexpected.

My brief encounter with Mela and a number of Team Star’s other members was much more straightforward and felt like a slightly remixed approach to the Gym Test / Gym Leader battle one-two punch. Before Mela would fight me while sneering from the top of her monstrous Mad Max-like car, I had to work my way through a series of Auto Battles with her underlings. Unlike the Auto Battles with wild pokémon, Scarlet and Violet’s challenges involving them require you to be a bit more strategic about how you send out a group of battlers to deal with individual pockets of foes without fainting in the process. Unfair as it felt that literally over a dozen Team Star goons (who are mostly other children you go to school with) were ganging up on me, it was also fun watching my Armarouge, Wiglett, and Farigiraf run around dispatching trios of Torkoal before running up to check in with me.

The false sense of security Brassius lulled me into was part of what made the intensity of battling Mela, a Fire-type specialist, so surprising and helped me remember that Scarlet and Violet’s Terastal phenomenon is something worth considering when you’re in a pinch. After Sword and Shield’s Dynamaxing, Terastallizing feels like a step forward that’s as visually elegant as it is gaudy and extra. By activating your Tera Orb in what definitely looks and feels like the beginning of a magical girl transformation sequence, you make pokémon don crystalline headpieces that can either grant them entirely new typing or enhance the strength of the types they already have.

Being able to give your pokémon a new type — and all of its accompanying resistances and weaknesses — is almost definitely going to have an interesting impact on how players build their teams for the competitive circuit this generation. It wasn’t immediately obvious to me at first, but making Armarouge put the candle hat (that’s not really a hat, but you see) on while a status-changing move like Sunny Day was in effect made it strong enough to brute force its way through an enemy Fire-type that was about to win. For people like myself who’re used to beating the main game by leaning on type advantage, I can see Terastallizing being a novel way of encouraging us to play a bit differently — not as a rule but just as an option to keep things fresh.

Slightly less fresh but nonetheless fun are Scarlet and Violet’s Tera Raid Battles that pit you and up to three friends against wild Terastallized pokémon as a group before a timer runs out, forcing you to leave its den. Like Sword and Shield’s Max Raid Battles, Tera Raids require you and other players to coordinate your moves carefully in order to defeat the stronger wild beast. But here, you no longer have to wait for other trainers to take their turns, and the key to winning is understanding when everyone needs to be attacking and when everyone needs to focus on supporting and / or healing one another by cheering.

While I can definitely see Tera Raids being more enjoyable when you’re a bit more familiar with the games, its monsters, and playing with friends, hopping in for the first time, I was struck by how much it sort of felt like a chaotic Pokémon Stadium mini-game — which isn’t a bad thing but is something I wouldn’t want if I were, say, shiny hunting. That being said, Tera Raid battling is just one piece of the larger Pokémon Scarlet and Violet picture. There was so much more that I didn’t have the time to spend on that I can’t help but feel excited to see what all else the games have to offer.

Pokémon Scarlet and Violet launch on the Nintendo Switch on November 18th.