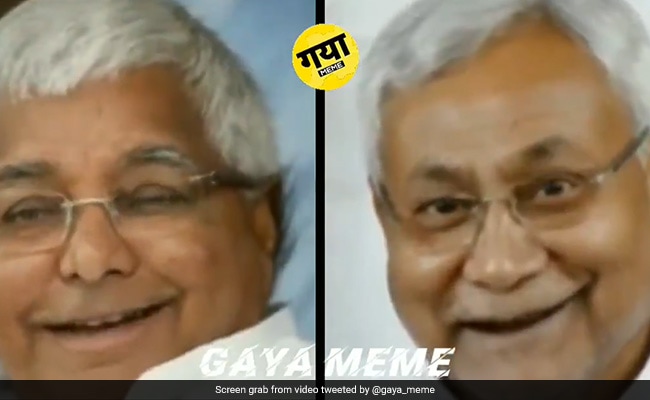 Nitish Kumar is set to take oath as the Chief Minister of Bihar today.

With Nitish Kumar ending his party’s alliance with the BJP and reuniting with his friend-turned-foe-turned-friend Lalu Yadav’s party to form a new government in Bihar, the social media is abuzz with memes.

One such meme that has now resurfaced and is being widely shared, points to the unpredictability of Bihar politics.

With the ‘Qismat ki hawa’ song from Albela (1951) playing in the background, the meme features the faces of the two top Bihar leaders, animated to lip-sync to the lyrics of the song.

Sung by C Ramchandra, the translation of the song’s lyrics stands: The wind of destiny is at times gentle, and sometimes harsh.

In the present scenario, the lyrics adds to the satire on the political fate as the Janata Dal (United) changes its partner yet again to make a comeback.

Meanwhile, a user did point out that the ‘wind’ has always been favourable for Nitish Kumar, whose political manoeuvres have so far ensured him the top post.

“But, for Nitish Kumar, Kismat ki hawa is always garam!” the user noted.

Nitish Kumar is set to take oath as the Chief Minister of Bihar for the eighth time at 2 pm today. Lalu Yadav’s son and Rashtriya Janata Dal leader Tejashwi Prasad Yadav will be sworn in as his deputy. Mr Kumar had resigned as Chief Minister yesterday as he ended his coalition with the BJP.

After the split, the BJP accused Mr Kumar of “betraying the mandate of the people” by switching coalition partners mid-term.

This, however, remains an established trait of the JD(U) leader and has been one of the major his critics use to debate his political principles.

Meanwhile, Tejashwi Yadav, to-be number 2 in Bihar government, has accused the BJP of betraying its allies and intimidating others, at a news briefing with Mr Kumar by his side.