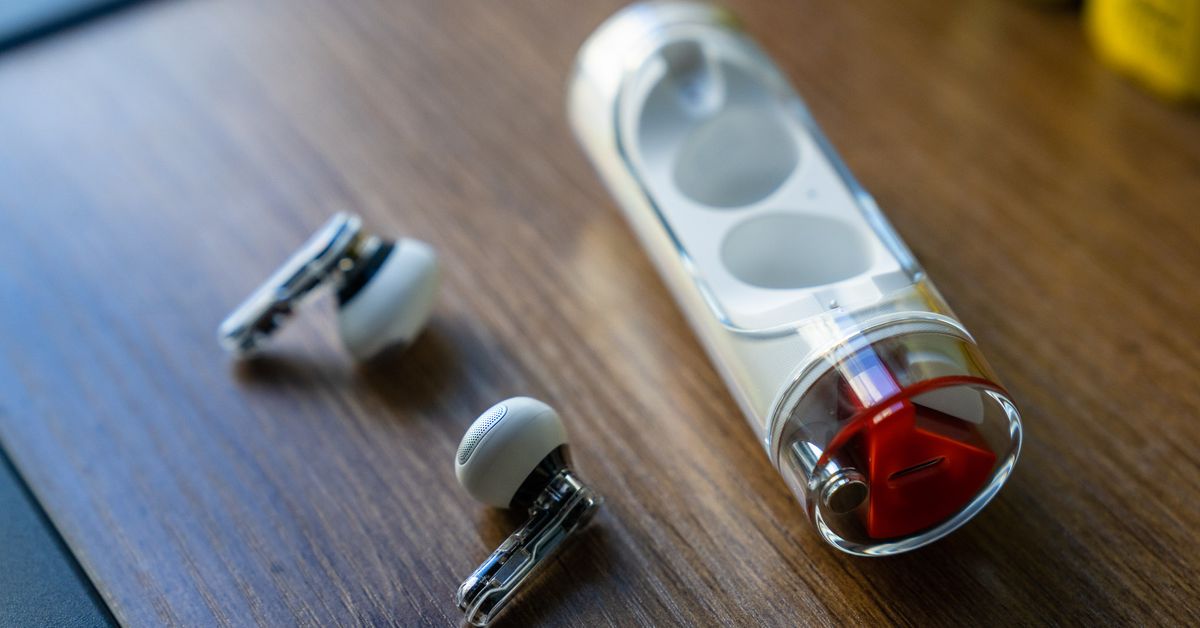 With new gadgets, you sometimes hear about the “early adopter tax.” The idea is that a company’s first swing at an idea might not be perfect; it might be buggy, badly designed, or otherwise miss the mark in some way. Nothing’s debut Ear 1 true wireless earbuds are a case in point. When we reviewed them last year, we found they suffered from a lack of polish at launch, including some software bugs and a lack of software features.

In contrast, the Ear Stick feel like a pair of earbuds from a company that’s learning its lessons. The user experience is far better this time around, with far fewer connectivity and charging issues, and Nothing has updated its app to offer more control over their sound and shortcut controls. They also come in a redesigned cylindrical case, which is quirky and fun to use.

But the Ear Stick are less of a straightforward successor to the Ear 1 earbuds and more of a stripped-back alternative. They don’t offer active noise cancellation, there are no silicone ear tips to passively block out background noise, and there’s also no wireless charging. At $99, the Ear Stick are more affordable than the Ear 1s, though that’s only because Nothing hiked the price of its debut buds to $149 earlier this week. You could almost call the Ear Stick a prime example of shrinkflation.

Nothing’s Ear Stick earbuds offer fewer features but a higher level of polish than the Ear 1. That makes them a good pair of earbuds, albeit for a particular kind of listener.

How we rate and review products

I really like the approach that Nothing has taken with the Ear Stick’s charging case. It’s a cylinder, a little under 3cm in diameter and a little over 8.5cm long, with a wheel on the right side that spins to reveal the earbuds. (The “Stick” in the name appears to be a reference to the case having the shape of a tube of lipstick.) Compared to Apple’s flat-ish charging cases for its AirPods, Nothing’s case is a little thick, but it slid easily into my jeans pocket next to a wallet. It was also exactly the right shape to fit in my running shorts in a pocket normally meant for energy gels, which was great for me personally.

The Ear Stick’s charging case is a delight

The earbuds have a similar look overall to the Ear 1s but without the silicone ear tips that create a snug fit in your ears. This has an impact on sound quality that I’ll get into in a little bit, but I think what’s more important is what it does to the fit of the Ear Stick earbuds.

This fit is functional but might not be to everyone’s tastes. The Ear Stick earbuds happily stayed put over the course of a 50-minute jog, and at no point did they slip or fall out (they have an IP54 rating for dust and water resistance, so a little sweat shouldn’t be a problem for them). And yet, I was often nudging the left earbud toward the front of my face, trying to get it to sit a little deeper in my ear. This isn’t a problem that’s unique to the Ear Stick, but if you don’t like the fit of the regular AirPods, then you’re unlikely to like the fit here.

The Ear Stick (left) compared with the original Ear 1 (right).
The case charges via USB-C, with no wireless option.

The lack of ear tips, not to mention the complete absence of active noise cancellation in these earbuds, means that you hear a lot of background noise while wearing them. If you want a pair of true wireless earbuds for use on public transport, long plane flights, or even just in a noisy office, then you might want to consider an alternative like the Anker Soundcore Liberty Air 2 Pro if you’re on a budget. But there are valid reasons to prefer a more open design like the one offered by the Ear Stick earbuds. You might want to be aware of your surroundings while out running without having to rely on an earbuds’ transparency mode.

I also like this more open style of earbud for voice calls since it allows me to hear my own voice more clearly while speaking. It just feels more natural. In terms of microphone quality, the Ear Stick’s three microphones per earbud do a much better job than the Ear 1. Although they sound pretty much identical to Nothing’s first earbuds in a quiet room, with background noise (such as water running from a kitchen faucet), the Ear Stick did a much better job at keeping my voice audible with the loud sound of washing up happening in the background and were on a par with Samsung’s Galaxy Buds Live.

Battery life is in line with what you get from many other earbuds these days. The Ear Stick earbuds offer up to seven hours of listening time (a slight improvement over the 5.7 hours the Ear 1 offered with ANC off), and combined with the case, you get 29 hours (down from 34 hours with the Ear 1). That’s not class-leading, but it’s par for the course. There’s a USB-C port on one end of the case for charging, but no wireless charging option — another missing feature compared to the Ear 1.

As opposed to the tap controls found on the Ear 1 earbuds, you activate the Ear Stick’s shortcuts with a press of the stem. The Ear Stick’s controls are far more reliable than touch controls while out running with sweaty hands, although it can be tricky to raise or lower the volume in small increments without accidentally pausing your music (the Ear 1 used a more distinct swiping gesture). You can customize every shortcut aside from the single press in Nothing’s companion app, which also offers EQ controls that allow you to adjust the earbuds’ mix of bass, mids, and trebles.

In my time using the earbuds, I encountered precisely one bug when the connection seemed to get confused and played only out of the left earbud for half a second before resuming its connection to both earbuds. But otherwise, I didn’t run into any issues while listening to the earbuds at home, while running, or while traveling in central London. I could listen to either the right or left Ear Stick earbud on its own, as well.

As mentioned previously, along with letting in more background noise, the lack of silicone ear tips also has an impact on sound quality. The less snug fit means more bass can leak, leading to a less punchy sound. Nothing is trying to compensate for this with a feature it’s calling “Bass Lock,” which attempts to measure your ear canal and compensate the earbuds’ bass accordingly.

The technology seems to work, but only to an extent. Listening to the Ear Stick earbuds side-by-side with Nothing’s previous Ear 1 earbuds made it immediately apparent just how much punchier a pair of noise-isolating ear tips can make earbuds sound. But where the Ear Stick can’t keep up in terms of bass, it makes up for in overall balance. The Ear Stick sounds less muddy and more even, with less of a hissy sibilance sound in the trebles. Their overall detail can’t match up to more expensive competitors, but they’re capable enough for $99.

The charging case while closed.
Controlling the earbuds with a squeeze of their stem.

As a second-generation product, it should come as little surprise that the Nothing Ear Stick feel a lot more polished than their predecessor. I only experienced one brief connection hiccup in my time with the earbuds, voice call quality is vastly improved, and its redesigned charging case is delightful.

But the Nothing Ear Stick are less of a successor and more of an alternative to the Ear 1, designed with a different audience in mind. The open fit feels less snug in the ear and lets in a ton of background noise. Combined with the lack of ANC, the earbuds feel much less suited to use in loud environments where you’d rather not hear what’s going on around you. They might be far better for listening to music and making calls in a quiet office, but you might not want to use them on the commute into work.

Every smart device now requires you to agree to a series of terms and conditions before you can use it — contracts that no one actually reads. It’s impossible for us to read and analyze every single one of these agreements. But we started counting exactly how many times you have to hit “agree” to use devices when we review them since these are agreements most people don’t read and definitely can’t negotiate.

The Nothing Ear Stick earbuds can be paired over Bluetooth and used without any software agreements. But by using the mobile app to adjust settings, you agree to:

The app also includes an opt-in toggle to join the Nothing “improvement program,” where you can provide feedback and share usage data with the company.

The final tally is no mandatory agreements, and three optional ones.

Photography by Becca Farsace and Amelia Holowaty Krales / The Verge