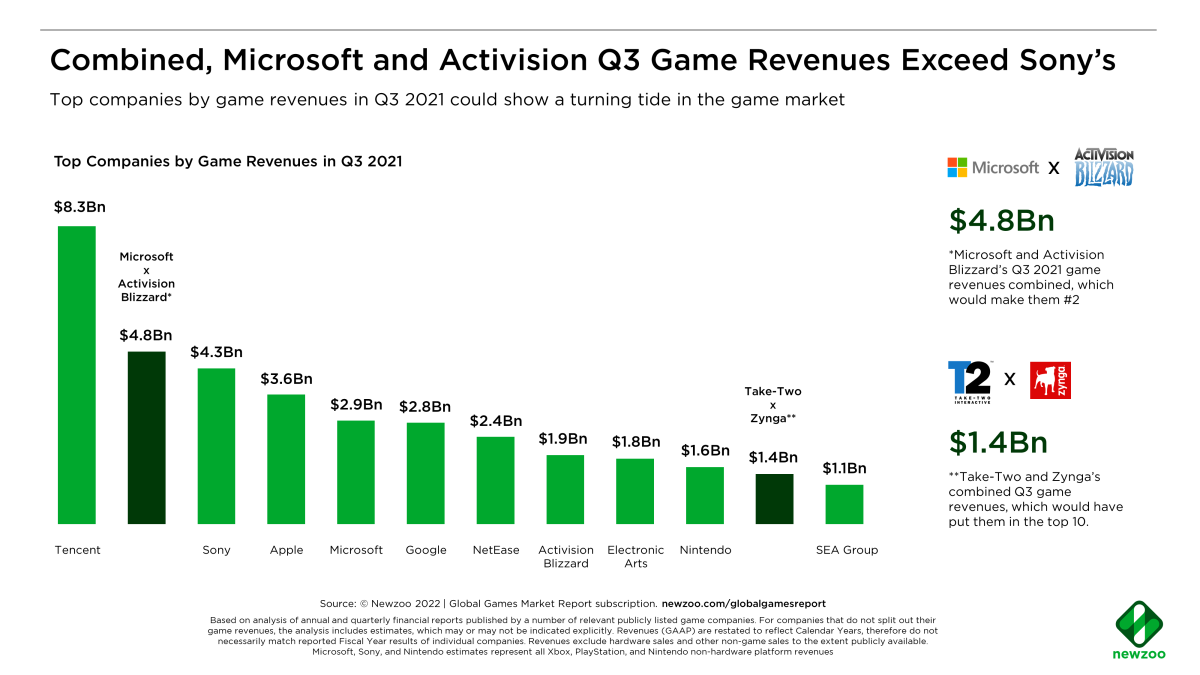 Newzoo today released data and analysis about 2022’s spate of mergers and acquisitions in the games industry. According to its information, the various acquisitions made so far this year have already exceeded the total M&A for 2021. It also released details about how each of the acquisitions changes the industry.

The biggest acquisition so far is, of course, the Microsoft-Activision Blizzard deal. Newzoo illustrates just how big of a deal (as it were) this is for Microsoft by combining its 2022 revenue with that of Activision Blizzard. According to Newzoo’s data, Microsoft was #4 in game revenue in Q3 2021, with $2.9 billion. Sony was #2 with $4.3 billion. However, when Microsoft’s revenue is combined with Activision Blizzard’s, it would add up to $4.8 billion, meaning Microsoft would have beaten out Sony in Q3 2021.

Newzoo analyst Rhys Elliott added that the acquisition is about more than a revenue stream. Specifically, it’s a boon to Microsoft’s subscription efforts. “Microsoft is playing the long game, and game content and services are at the heart of it. Massive franchises like Call of Duty, Warcraft, and Candy Crush and smaller IP like StarCraft and Crash Bandicoot will bring value to Game Pass. The developer’s catalog of games goes back over 20 years so Microsoft will have plenty of options to add to Game Pass’ library.”

Sony’s acquisition of Bungie, says the report, is less about revenue and more about the company’s content strategy. It intends to build more live service titles, which the Destiny developer is best positioned to do. Sony also intends to grow its presence off the PlayStation platform, and Bungie would assist that with future multiplatform releases.

The final deal Newzoo discusses is Take-Two’s acquisition of Zynga. Elliott predicts that this acquisition is largely about the revenue that Zynga can bring in, and also expanding the company’s presence on mobile. Elliott adds that Take-Two has tried to acquire its way to diverse content before, but was thwarted: “The company tried to diversify its portfolio into racing games last year via acquiring Codemasters, but EA swooped in at the last moment.”