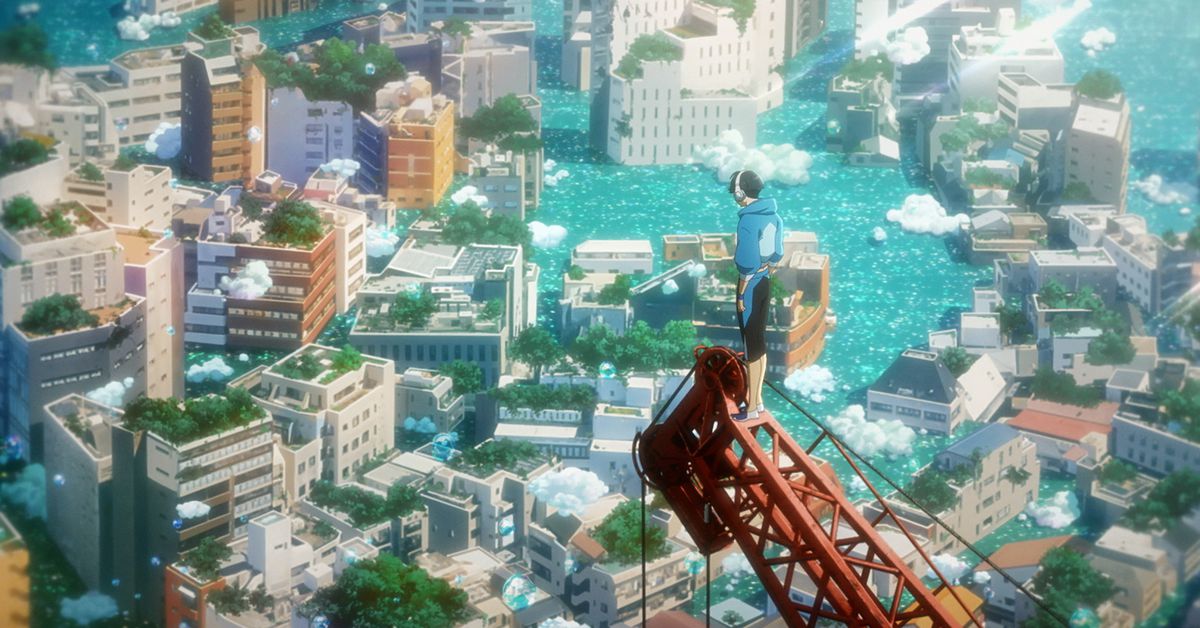 In Bubble, a new anime film on Netflix, there are plenty of the typical hallmarks of a dystopic city. The movie takes place in a version of Tokyo that’s been almost entirely abandoned, and there are lots of rusted cars, crumbling buildings, and greenery reclaiming its place amongst the urban sprawl. But there’s also a vibrancy to the city — something that was very important to director Tetsuro Araki. “We wanted to make it light and colorful because we wanted to present this dystopian landscape almost as a utopia,” he tells The Verge.

The reason for that tone might have to do with Bubble’s rather unique premise. It’s not a typical end of the world story. Instead of a planet beset by war or natural disasters, in Bubble, the earth is attacked by… bubbles. Five years before the events of the film, mysterious bubbles began to rain down all over the world, and eventually, a giant one enveloped the entire city of Tokyo. From there, while the rest of the country went on largely as normal, Tokyo became mostly abandoned. The only residents are street kids who live on their own and participate in a team-based version of parkour where the winners get supplies like gasoline and ramen. For these kids, the sense of freedom in the city is almost like a utopia.

It’s certainly a unique premise and one that’s also used to tell a coming-of-age story that pulls liberally from The Little Mermaid. According to Araki, who previously worked on shows like Death Note and Attack on Titan, it was the more personal part of the story that came first. “It all came from this idea that we wanted to tell a coming-of-age / love story,” he explains. “This was through conversations that I was having with my producer, Genki Kawamura. From there, we decided to use the motif of The Little Mermaid, and after that came Gen Urobuchi, of course known for his sci-fi work, and he joined us as the screenplay writer for this film. It was through him that we ultimately arrived that it would be about bubbles.”

“It’s just so grotesquely different from the Tokyo that we’re used to.”

Tokyo is a city that has been depicted and reimagined many times in pop culture, often in post-apocalyptic scenarios. Araki says this ubiquity actually helped with crafting Bubble’s unique vision. The film’s version of the city is partially underwater, and there are also areas where gravity has been distorted (which, in addition to looking cool, helps make the parkour sequences more exciting). “Tokyo is a city that is so familiar to us that it was easy to create this impactful backdrop because we’re showing it in a different way,” Araki says. “It’s a sunken city now. It’s just so grotesquely different from the Tokyo that we’re used to.”

The challenge, he says, was making sure everyone stayed on track with that vision. “I had to be very meticulous in directing it because whatever they would produce would tend to lean towards darkness,” he explains. “So I had to remind all of my people, ‘Listen, this has to be a utopia that we’re depicting here.’ Time and again, I would have to remind them.”

The team also had to face the unique circumstances of creating a largely abandoned version of a major real-world city during a time when the streets were empty due to the pandemic. (It was a similar challenge faced by the creators of the game Ghostwire: Tokyo.) Though the idea for the film predated the pandemic, it still had an impact on the creative process. “It was almost like reality was catching up with what we were depicting in the film,” producer Genki Kawamura tells The Verge. “The streets were closing down, [Japan] did host the Tokyo Olympics where they tried to shield the Games from the effect of the pandemic by creating a sort of bubble system. This is a very sci-fi film, but the strangeness of reality helped ground it in reality.”

Bubble ultimately introduces a very particular twist, which I won’t spoil here, that ties together all of its seemingly disparate elements, from the love story to the parkour to the bubbles themselves. It’s clever and unexpected — even if it took a while to figure it out. “It was all one big, long, meandering exploration,” Araki says of the creative process.

Bubble is streaming on Netflix now.