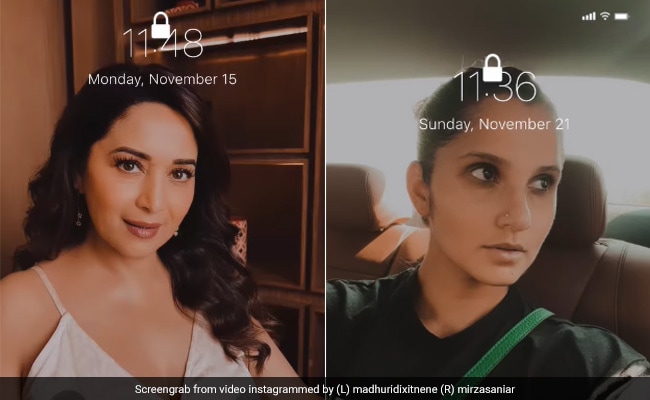 A new trend on Instagram is sweeping the Internet and celebrities are joining it like a pro. Called the “iPhone Lock Screen” trend, a number of Bollywood celebrities like Madhuri Dixit, Gauahar Khan and Karishma Tanna have already tried it. These celebs had shared their videos on Instagram Reels with the lock screen filter on. All it requires you to do is to stay still in front of your phone camera for a few seconds as a peppy number plays in the background. And, then make a gesture at the drop of the beat to debunk the idea that the viewer was looking at an image.

Since the lock screen challenge has gone viral, many celebrities have aced it. The USP of the trend is its signature tune “Banna Re”.

Tennis ace Sania Mirza tried this in her car. And, like a pro, she remained still until the beat dropped and blinked her tired eyes. “When you have a sick kid and are functioning on 2 hours of sleep. Going with the trend though,” she wrote in the caption.

Now, we have the ever-smiling Madhuri Dixit. The actress gave the challenge a twist. What did she do? Madhuri Dixit just winked and twirled in a chair. “Real to Reel,” she said. Her take on the trend has racked up a staggering 49.5 million views on Instagram.

Actress Munmun Dutta of Taarak Mehta Ka Ooltah Chashmah fame stood still with one finger on her cheeks and then suddenly broke into a smile. Her video has been viewed over 27 million times.

In an Instagram Reel shared by Zaid Darbar, his actor-wife Gauahar Khan too nailed the trend like a pro. She stood still by the wall and as the beat dropped, Zaid jumped into the scene to break the monotony. “Guess what’s my actual lock screen pic? Keep the fun in your relationship. My crazy partner,” Zaid wrote.

Have you tried it yet? What are your thoughts? Share in the comments section.