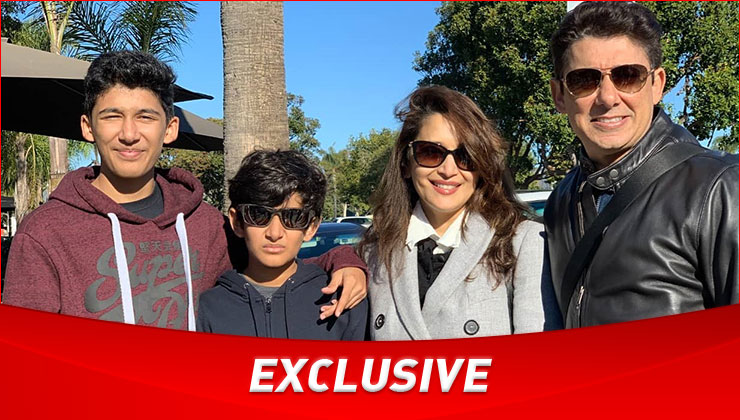 Madhuri Dixit got married to Dr Shriram Nene in 1999. They are parents to two kids, Arin and Ryan. Madhuri is a doting mother to her kids. In an exclusive interview with TheSpuzz, Madhuri spoke about her kids and how they react to her stardom.

Arin and Ryan stay away from the limelight. The Dhak Dhak girl gave her kids a very normal upbringing. Talking about that, Madhuri said, “Absolutely. That’s important to create good people, like they have their aaji, aajo, they have their jiji, jijo (Ram’s parents) They have them around all the time. They interact with them, they love them and friends. Whatever you do in your life, whatever you do should determine who you are. Not what you become or what you get out of it. But what you’re doing is what defines you. And that’s what I’ve taught them.,

She added, “My fame has never touched them and they are very nonchalant about it. Through friends they sometimes feel like, you know, they say ‘oh, who’s your mom? What’s her name?’ and if he says ‘my mom is my mom’ they say ‘oh, we know she is Madhuri Dixit and you’re so lucky to have her’. So he’s like, ‘Mom, you’re just my mom,

She continued, “They are good people and that’s what I want them to be.,

Apart from her kids, Madhuri Dixit also recalled her romantic first meeting with her husband and said, “I met him at a party at my brother’s house. And it was so refreshing to meet a person who had no clue as to what kind of films I’ve done, who I am. And you know, he just knew that I’m an actress, but that’s about it.,