London’s Heathrow Airport Is A Sea Of Luggage. This Is Why 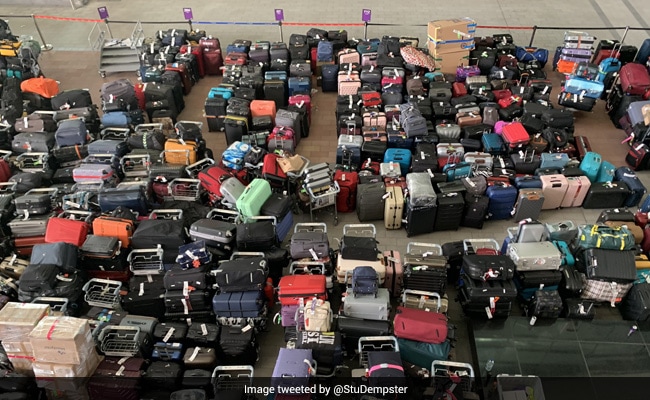 Hundreds of suitcases lay sprawled across the floor of London’s Heathrow airport after the baggage system in Terminal 2 faced a “technical issue” on Saturday.

Frustrated passengers posted photos and videos of the chaotic sea of baggage on Twitter. Some users claimed that there was a two-hour delay in reclaiming their baggage.

Absolute chaos at #Heathrow where all passengers are asked to drop their baggages at level 0 and hope it will reach destination one or two days later. pic.twitter.com/rLKuyNlrGk

Lost luggage has a final resting place perhaps….@HeathrowAirport T2…mine’s the black one (I think) pic.twitter.com/u0tDMTgFHj

A user tweeted a video from inside the airport where he said that “all the baggage belts in Terminal 2 of the airport had stopped working”.

“We had to que up our luggage and we were told that security would watch it so that we could go through security, and maybe our luggage might make it to the plane with a 50-50 shot.”

The Twitter user went on to say that there was immense stress caused on all the airlines and passengers, but then “out of the blue, the belts started working”.

Hi there, We’re very sorry that the technical issue with our baggage system caused this delay, our airline partners will be working to deliver luggage, and we trust your airline will provide you with an update soon. For airline contact information, visit: https://t.co/tNNHwETNKM

A spokesperson for Heathrow airport said that some passengers may have had to travel without their luggage, BBC reported.

She said, “Earlier today there was a technical issue with the Terminal 2 baggage system which has now been resolved … We are working closely with airlines to reunite passengers with their luggage as soon as possible. We’re sorry there’s been disruption to passenger journeys.”