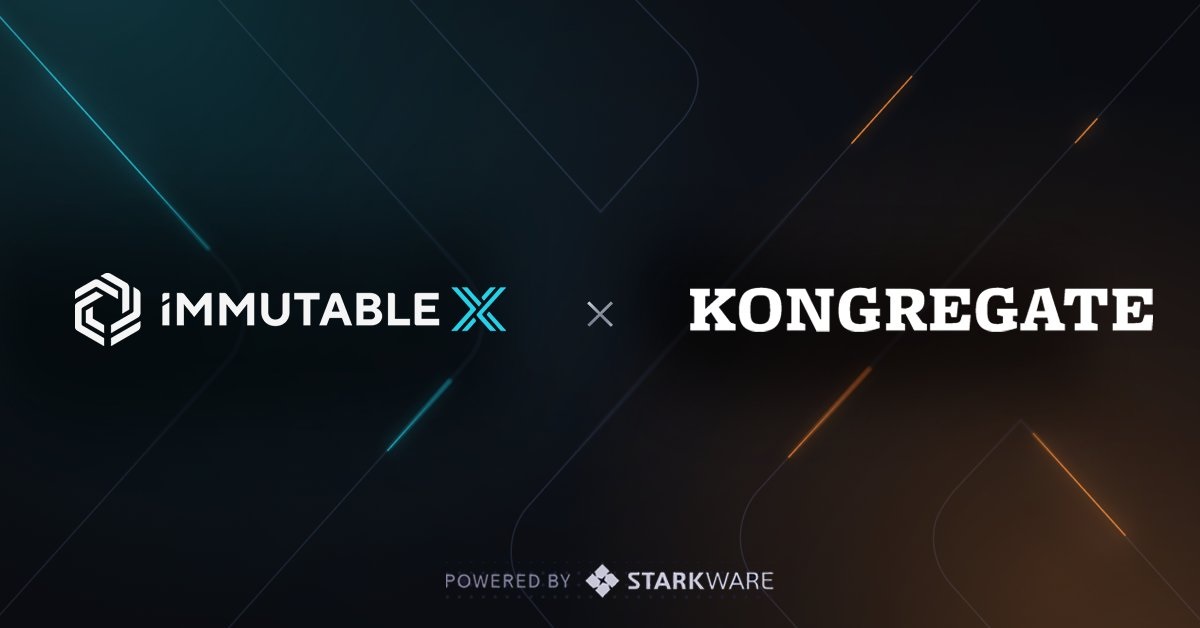 Today, the companies announced a $40 million fund consisting of an IMX token pool that will be awarded as grants to blockchain game integrations on Kongregate.com.

Kongregate.com is relaunching later this year to become a destination for blockchain games from both established and indie developers and home to a new generation of gamers. Kongregate, which was founded in 2006, has a long history of developing and showcasing experiences from indie game devs.

With the relaunch of Kongregate.com for Web3 coming later this year, the company said it will stay true to its roots in game advocacy, community development and indie developer support by cultivating one of the game industry’s most inclusive spaces for developer innovation, lively community interaction and game discovery.

“With the relaunch of Kongregate.com for web3, we’re once again creating a destination unlike any other for developers and gamers to come together to discover, chat about and play games!” said Max Murphy, Kongregate’s CTO, in a statement. “As gamers ourselves who have long been dedicated to what made the original site so fun and special for millions of community members worldwide, we’re excited to reopen doors with new, sustainable technology that enables players to uniquely experience and be a part of the games they dedicate their time to.”

Developers will benefit from its end-to-end integration solution to ensure that each game on the platform is a fun and engaging experience for players, the company said. This includes a blockchain SDK, game design and tokenomics consultations, and community growth services.

“We want our players to be owners in their personal gaming journeys,” said Markus Lipp, Kongregate’s CEO, in a statement. “Blockchain technology allows us to give them a deeper experience in ways not possible with traditional games, from enabling players to help to shape what comes next in the storylines they love to being able to maintain their unique character across titles. Through our continued partnership with Immutable X, we’re ensuring that our players have the best NFT experience possible with technology that brings true innovation to gameplay, while also ensuring it’s green and scalable.”

“As an early innovator in web-based gaming, we’ve been proud of our partnership with Kongregate to help power the next generation of blockchain games,” said Robbie Ferguson, Co-Founder and President, Immutable. “With today’s launch of our blockchain developer fund, we’re excited to deepen our relationship with Kongregate as we work together to attract the best and brightest developers to build new titles on Kongregate’s relaunched web3 platform.”

The companies will be sharing more about plans with developers currently on the platform soon; for new developers interested in learning more, you can reach out to [email protected] to be added to the mailing list.

Kongregate recently announced the Bitverse, a collection of Web3 games, and Blood Vessels, a blockchain game.

Each game in the Bitverse will have different game mechanics and gameplay styles but will live within the same game universe – or metaverse. To start, the Bitverse will consist of three games: Bit Heroes — a Kongregate fan-favorite cross platform mmorpg, Bit Heroes Arena — a battle royale shooter currently in open beta, and a third game currently in development planned to launch later this year.

The Bitverse will feature a unique combination of fungible and non-fungible tokens (NFTs) for players to collect and earn, rewarding their engagement with the metaverse. Players will be able to play as their “hero” or avatar across games as a non-fungible token (NFT), but each game will also be playable as a stand alone title for those that don’t want to engage in the Bitverse’s deeper lore and gameplay.

The first set of unique one-of-one avatars will be available for presale in Q2 2022. More information about how the NFT avatars and token economies will work across games is available in the official Bitverse whitepaper at www.thebitverse.io.

Kongregate’s Lipp said in an email to GamesBeat that he partnered with Immutable X because it is a known leader in the blockchain space whose focus is to advance the technology in ways that meaningfully address environmental and ethical concerns.

“We intend to build a catalog of web3 games that’s based on fun and engaging experiences that showcase innovative uses of blockchain technology. We intend to leave the current traditional games on the site as is but add new blockchain games in a variety of gameplay styles that will appeal to both traditional and blockchain gamers,” Lipp said.

I asked why Kongregate is embracing NFTs, given some gamers and game devs hate it.

“Kongregate has always been about bringing great gaming experiences to our broad worldwide community of players.
Our goal is to enhance the existing F2P experience. Web2 elements won’t disappear, but instead be enriched by Web3 opportunities, such as our ability to more deeply engage our community in the development process as many of these projects and communities start before the game has entered development,” Lipp said. “We’re having really exciting conversations with our communities in Discord and through live AMAs thanks to this new technology and this new approach to game development.”

He added, “Additionally, once NFT games launch, they offer players deeper engagement than traditional experiences as they can buy, sell, trade, giving them digital ownership and the ability to be really invested in the game experience through the NFT technology. NFTs allow us to give players more permanence or customizability to their game experience, choosing their level of engagement. Our recently announced multi-game metaverse, Bitverse, will benefit from both implementations of the technology. Players will be able to play as their “hero” or avatar across games as a non-fungible token (NFT), but each game will also be playable as a stand-alone title for those who don’t want to engage in the Bitverse’s deeper lore and gameplay. And we’re actively listening to our community’s feedback about the systems, designs, and direction the Bitverse will take in the future in our growing discord.”

And he said that Immutable X has a gas-free minting and trading solution and it does not compromise the security of the most used blockchain globally for NFTs, Ethereum.

He said the companies are looking for all kinds of game developers.

“We’re interested in helping bring traditional game developers to blockchain, but also want to be a home to developers already experimenting in the space. If you have a fun game and want it to reach a larger audience, Kongregate is a great place to do that,” Lipp said.

Kongrate has been experimenting in the blockchain game space since 2019, where the focus at that stage was proving how the technology works best with games.

“Many of our early examples with the technology were really about exploring what it could do, and how we could best utilize it and understanding what mattered most to users,” Lipp said. So, we do have blockchain technology in a few of our games currently as well as on Kongregate.com, but they are all closed systems. In 2022, our mission is to break down those barriers and launch games that are fully blockchain enabled thanks to our extended partnership with Immutable X.”