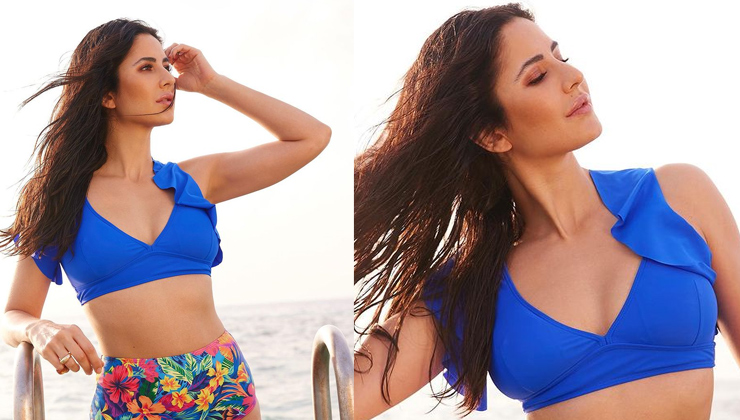 Katrina Kaif has managed to set the internet on fire with her blue bikini photos on Instagram. The actress is all ready to impress her fans and how! She took to her Instagram to share some stunning bikini photos as she exudes hotness. Katrina Kaif made a stunning appearance in a blue bikini in the photos on Instagram. The actress is striking some hot poses and enjoys the wind in her hair. Katrina’s latest pictures make us want to jett off on a vacation.

In the photo, the Jee Le Zaraa actress is clicked wearing a blue bikini top. She has paired the sexy bikini top with multi-colored panties. Kaif looks brilliant as she strikes sexy poses for the camera. The photos show Katrina coming out of a pool. Sharing the photos, Kaif dropped blue hearts in the caption. The actress shows off her long wet hair in the photos.

Take a look at the photos below:

Reacting to the photos, many of the actor’s fans showered love on her. Several also dropped fire emojis in the comments section of the post.

Meanwhile, it was only recently that Katrina had made a heartfelt post, lauding her husband, actor Vicky Kaushal. The actress reacted and showered love on Vicky as his recently released movie titled Sardar Udham won big at the IIFA 2022 Technical Awards. The movie won 3 awards at IIFA 2022 Technical awards.

On the work front, the actress has the movie Tiger 3 with Salman Khan and Emraan Hashmi. Katrina also has the movie Merry Christmas with Vijay Sethupathi and Jee Le Zaraa with Priyanka Chopra and Alia Bhatt in her kitty.