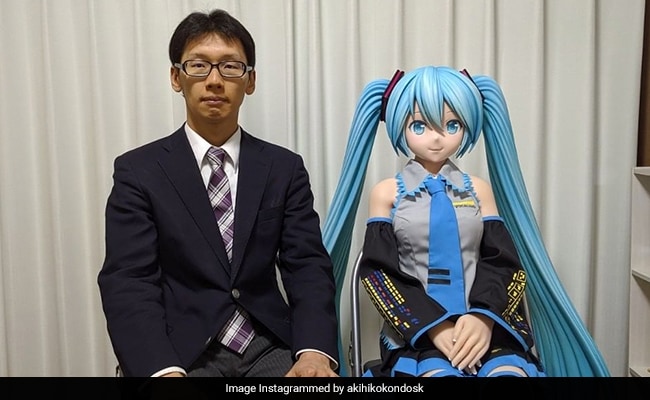 Akihiko Kondo is not the only person who is in a relationship with a fictional character.

A Japanese man who married a hologram singer back in 2018 now hopes to raise awareness for “fictosexuals” – someone who is sexually attracted to fictional characters.

According to New York Times, Akihiko Kondo is married to fictional character Hatsune Miku – a computer-synthesised pop singer who has toured with Lady Gaga and starred in video games. Now, four years into his marriage with Miku, Mr Kondo has opened up about his relationship with his anime wife. The 38-year-old revealed that he found love, inspiration and solace in Miku.

Mr Kondo was dating Hatsune Miku for a decade before they had an unofficial wedding ceremony in Tokyo. According to the 38-year-old, his relationship with the fictional character helped him get out of deep depression. Speaking to NYT, Mr Kondo said that his assortment of Miku dolls ate, slept and watched movies together, and sometimes even went on romantic getaways.

Mr Kondo knows that people think it is strange, and he also knows that Miku isn’t real. However, he said that his feelings for the fictional character are very much real even though people think he’ll eventually grow out of it.

“When we’re together, she makes me smile,” he said in a recent interview, adding, “In that sense, she’s real.”

According to NYT, Mr Kondo first found comfort in Miku in 2008, after bullying at his job sent him into a spiral of depression. He had decided long ago that he would never love a real person, partly because he didn’t want the life that Japanese society demanded of him. Later, the 38-year-old man began making songs with Miku and purchased a stuffed doll of the character online.

A major breakthrough in his relationship came a decade later when Mr Kondo was able to interact with the fictional character for the first time in 2017 thanks to a Gatebox – a $1,300 machine that allowed device owners to interact with characters via holograms and even unofficially marry them. A year later, he then proposed to Miku’s flickering avatar. “Please treat me well,” Miku had replied.

Mr Kondo argued that his life with Miku has advantages over being with a human partner. She is always there for him, will never betray him and he will never have to see her get ill or die, he said.

However, speaking to the Japanese newspaper Mainichi, the 38-year-old also accepted that there have been challenges as well. Mr Kondo revealed that the hardest moment came during the COVID-19 pandemic when Gatebox announced that it was discontinuing service for Miku.

He said that after four years of marriage, his relationship with Miku has hit a roadblock. But he also added that it hasn’t lessened his feelings for Miku. He told Mainichi that his love for Miku hasn’t changed and he plans to be faithful to the fictional character until he dies.

Meanwhile, it is to mention that Mr Kondo is far from the only person in the world in a relationship with a fictional character. NYT reported that thousands of “fictosexual” people in Japan have begun similar unofficial relationships with a variety of anime figures. Moreover, tens of thousands more around the globe have joined online groups where they discuss their commitment to characters from anime, manga and video games.