Jair Bolsonaro lost the Brazilian election, but he still has YouTube 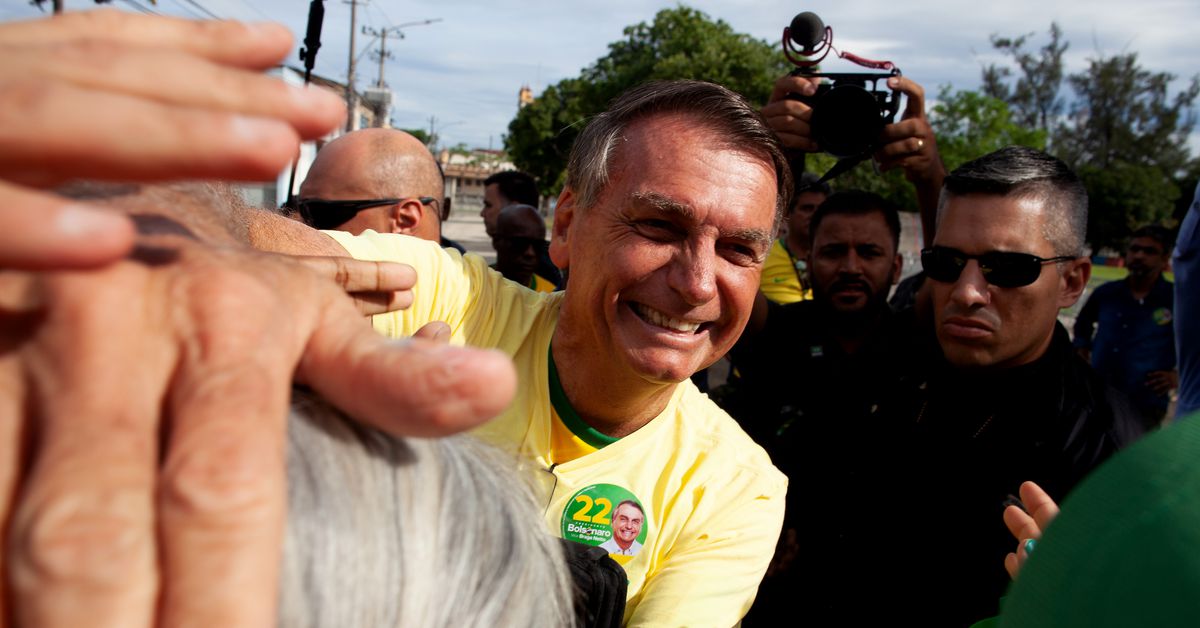 On Sunday night, former President Luiz Inácio Lula da Silva won the final round of the Brazilian presidential election with just over 50 percent of the vote, unseating the far-right Jair Bolsonaro. On Sunday night, Lula, as he’s widely known, told a crowd of supporters, “It’s time to recuperate the soul of this country.” But fully recuperating the country will mean grappling with the strange role of YouTube and other platforms in Bolsonaro’s success — and their continued influence on Brazil’s politics.

As of Monday morning, Bolsonaro has not conceded or even publicly acknowledged the election even happened — and it’s not clear how his supporters will respond to the results. Bolsonaro swept the 2018 Brazilian election amid a global wave of right-wing populism, leading a political movement that gained both supporters and funding through the social quirks of YouTube and Telegram. Now, there’s a serious concern that those networks will activate and begin aggressively denying the results of this week’s election. Blunting those forces will take more than a single election — and as the incoming government looks to consolidate power and legitimacy, YouTube’s pro-Bolsonaro faction will be one of its most visible and vocal spoilers.

“YouTube has become one of the most important sources of political information. It’s become more powerful than traditional media, basically,” Brazilian YouTube creator Thiago Guimarães told The Verge. “It’s very obvious [Youtube is] not doing enough. They’re doing less than enough.” (YouTube did not respond to multiple requests for comment.)

From the beginning, Bolsonaro eagerly tested the limits of what online platforms would allow. He refused to take the covid pandemic seriously, resulting in hundreds of thousands of deaths around the country as he baselessly claimed online and at unmasked rallies that the vaccine would turn you into a crocodile or give you AIDS. The latter proved even too extreme for Facebook, which deleted the claim from his page in 2021. It also earned him an investigation from the country’s federal police. Meanwhile, the president’s rabid followers, derisively referred to as “the Bolsominions,” waged a years-long info war not only against journalists and the country’s left but also Brazil’s center-right, who were labeled traitors for not falling in line.

“I’m not going to expect anything from YouTube at this point.”

As the election intensified, the online bluster spilled into two different physical altercations involving Bolsonaro-linked politicians. On October 23rd, Roberto Jefferson, a former politician linked to Bolsonaro who was under house arrest, opened fire and threw a grenade at federal police who attempted to bring him to jail. (He was later indicted on four counts of attempted murder.) Then, on the 20th, a federal deputy in São Paulo pulled a handgun and chased a Black man through the streets of São Paulo’s upscale Jardins neighborhood after she claimed he pushed her to the ground for supporting Bolsonaro. (According to several different videos of the incident, it appears the deputy may have just fallen over on her own while being heckled.) Other deputies are now calling for her removal from office over the incident.

Perhaps sensing the precarious nature of Lula’s victory, US President Joe Biden released a statement congratulating him on the win within minutes of it being declared Sunday night. And Brazil’s largest newspaper, Folha, is reporting that US National Security Advisor Jake Sullivan is being sent to Brazil to ensure a peaceful transfer of power.

Of course, in 2022, a peaceful transfer of power online is necessary for one offline. Which is what worries people like Guimarães. “I’m very pessimistic about it,” he said. “I’m not going to expect anything from YouTube at this point.”

That failure is particularly important because of YouTube’s outsized popularity in the country. Though TikTok has all but eclipsed YouTube’s importance in America, the shortform video app is still thought of as something for young people in Brazil. And YouTube has effectively replaced — or at the very least, become equally as important as — mainstream television in Brazil, according to Guimarães. Brazil is YouTube’s fourth biggest market, with around 130 million active users, while TikTok only has around 74 million.

According to Guimarães, Bolsonaro’s supporters figured out how to use YouTube’s moderation policies to their advantage. The strategy goes like this: post pro-Bolsonaro propaganda on YouTube; instruct Telegram groups to download it or screenshot it; make clips of it for TikTok and Instagram; wait for YouTube to delete it for violating community guidelines; and then claim they were censored and spread the video and related media across Telegram and WhatsApp.

“It doesn’t matter if the video is deleted … They don’t really care.”

YouTube has also become host to a bevy of pro-Bolsonaro channels, which call themselves “alternative news outlets,” the most infamous being Jovem Pan, which is connected to a right-wing radio station in São Paulo but has amassed millions of subscribers on YouTube. The channel’s hard-right stance has earned it the nickname “Jovem Klan” on Brazilian Twitter.

The video platform’s rising importance in Brazilian culture, along with its overwhelmingly right-wing bent, has led to an inescapable feeling of radicalization in the country at the moment — and a big payday for pro-Bolsonaro YouTube channels. Last year, Brazilian news outlet UOL reported that a network of 12 YouTube channels made millions monetizing content attacking Bolsonaro’s enemies in the country’s Congress and federal court.

Guimarães also said that YouTube advertisements have been an incredibly effective way for Bolsonaro to spend his “Orçamento Secreto,” or “Secret Budget,” a dark money fund he’s been accused of using to buy real estate around the country and to influence the election. Earlier this month, UOL revealed that since August, Bolsonaro has pumped R$21 billion, or $3.9 million, into one of the country’s biggest social programs, which UOL found increased his place in polls by about 7 percent. And last month, The Guardian reported that an NGO called Global Witness was actually able to submit misleading electoral ads to YouTube and had them easily approved by the platform.

“[Bolsonaro’s campaign ads] are on my videos — people are complaining to me. They click on my videos and they’re like, ‘That’s false.’ I’ve watched it, too. It’s there,” Guimarães said.

Another outlet tracking the absolute tidal wave of Bolsonaro campaign ads on YouTube over the last few months is the English-language independent Brazilian news outlet Brasil Wire. Nathália Urban, a Scotland-based Brazilian reporter for the outlet, told The Verge that American tech companies like Google and Meta have spent four years largely ignoring anything Bolsonaro has said on their platforms.

“He said the most horrible things on social media and no one ever took it down,” Urban said. “Things like forest fires, police killings, racism, misogyny, LGBTQ-plus phobia, everything has been normalized by them. And you never see social media taking an action, not just against him, but also his sons, his supporters.”

“Facebook, in my personal opinion, has lost a hell of a lot of force in Brazil.”

But the internet landscape that Bolsonaro took advantage of in 2018 is different now. Facebook is no longer the center of the Brazilian online experience and, similar to the American social web in the lead-up to the November midterms, both Bolsonaro and Lula had to run their campaigns across a much more fractured internet.

“Facebook, in my personal opinion, has lost a hell of a lot of force in Brazil,” Vitória Brandão, a Rio de Janeiro-based journalist told The Verge. “It’s still widely used, but I don’t think it’s as relevant as it once was, let’s say four years ago.”

Another factor working against Bolsonaro was Brazil’s Supreme Electoral Court, which has grown more aggressive about regulating the flow of internet content during the election. Earlier this month, the court ordered YouTube to demonetize four pro-Bolsonaro channels, including one run by the president’s son Carlos Bolsonaro. It also recently unanimously voted to change the window regarding paid election content online. For 48 hours before the final vote and 24 hours after, ads, monetized political content, and notably, boosted content were forbidden and carried a fine of up to R$150,000 or $30,000 per hour that the content was online. Social networks had two hours to comply, and if they didn’t, the platform’s services could have been suspended entirely.

And the Supreme Electoral Court has been equally firm about the results of Sunday’s election. Alexandre de Moraes, the president of the court, said in a press release, “The result has been proclaimed, accepted and those who were elected will graduate in December and take office on January 1.”

It’s not just YouTube that continues to play a major role in spreading right-wing propaganda in Brazil. Bolsonaro leaned heavily on Facebook Live in 2018, using it to circumvent the traditional debate process in one decisive moment of the campaign. But during this campaign cycle, he has focused more specifically on Telegram and YouTube. The former president still used Facebook Live during this campaign — broadcasting live at least once a week and using his page to share sometimes dozens of short video clips each day — but those videos found a broader reach on Telegram and YouTube where they are clipped, remixed, and distributed.

The Telegram groups used by Bolsonaro and his supporters are popular enough that, this month, Brazil’s Supreme Electoral Court ordered content be pulled down off Telegram. In May, The New York Times reported from inside a handful of Bolsominion Telegram groups, calling it a “tide of madness.”

Bruno Natal, a Brazilian journalist and podcaster, told The Verge that messaging apps like Telegram and WhatsApp with easy forwarding capabilities, play a huge part in how Bolsominions connect with each other across the country and have had a profound impact on how voters have followed this year’s election.

“Since Android is the main operating system — to the tune of 80 percent of the market share — and iPhones are incredibly expensive here, iMessage never picked up and WhatsApp has been the main way to exchange text messages for free,” he said. “Of course, it comes with all the issues related to the dark web, meaning anything goes and it is really hard to find the ones responsible. Bolsonaro’s team has mastered this market opportunity and leveraged it to their benefit, especially since they simply don’t care about spreading straight-out lies.”

In many ways, Bolsonaro’s silent disappearance from public life is the safest way forward. If he does make a public announcement, there’s no telling what it could do for his still very passionate base. For every video of Lula’s supporters celebrating in the streets, there is another of evangelical Bolsonaro supporters praying in the streets or trying to attack political opponents. The division Bolsonaro has fomented isn’t going anywhere and has become a powder keg that could go off at any moment.

“It’s not a wave,” Brandão said. “It’s now a full-fledged movement. And it’s here to stay for at least another four years. It’s not just politics. It’s our ideology.”

But while Bolsonaro’s movement isn’t going away, Lula’s win suggests his movement isn’t either. As tense as the election was, Núcleo founder and editor Alexandre Orrico told The Verge it feels like a turning point for the country’s online left.

“In 2018, the right and the far-right came out ahead in terms of understanding social media engagement,” he said. “But in 2022, we are seeing part of the left entering the game.”