Internet Is Amazed By This Old Image Of A Japanese Beach 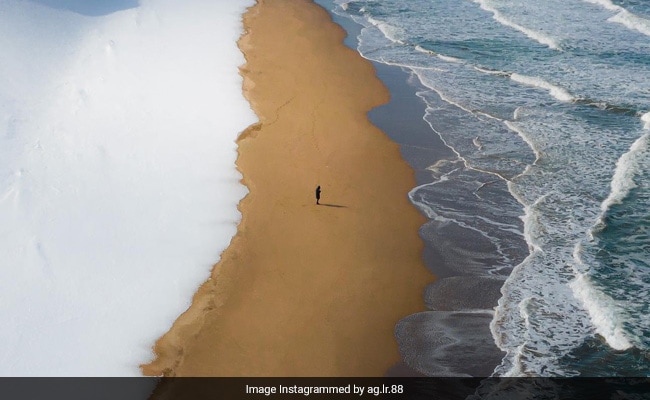 All of us have visited a beach or have at least its picture. And you will agree that most of these photos make us want to take a vacation. The calm waves of the sea and the soft sand releases ‘feel-good hormones’ in our brain and relaxes the mind. But have you ever seen a beach where snow, sand and the sea meet together? Believe it or not, this miracle was seen in Japan.

In a post shared by a photographer named Hisa on Instagram, one can see snow, sand, and sea meet each other at the very same place. In the photo, the snow is seen on the right side, while sea is on the left and a person is seen walking on the sand, present in between. The photo has appeared on other social media platforms too, like Reddit. And according to Reddit users, the photo was clicked at San’in Kaigan UNESCO Global Geopark which is located in the west of Japan and stretches from the eastern Kyogamisaki Cape, Kyoto to the western Hakuto Kaigan Coast, Tottori.

The photo was shared in January last year with the caption, “A walk along the ocean shoreline. #HelloFrom Sea of Japan” and is going viral again now.

Take a look at the photo:

Since being shared, the post has amassed over 18,000 likes. Many users were stunned to see such a phenomenon.

Also Read: Mysterious 80-Foot Object Appears On A Beach In US, Officials Clueless

“One of the most incredible and beautiful images I have ever seen,” commented a third user.

Another Instagram user added, “One of the most incredible and beautiful images I have ever seen.”

As per the official website of the San’in Kaigan Geopark, it boasts unique landscapes with a variety of geological features. It was designated as one of the Japanese Geoparks in December, 2008. In addition, it was inducted as a Global Geopark in October 2010.