In defense of the voice message 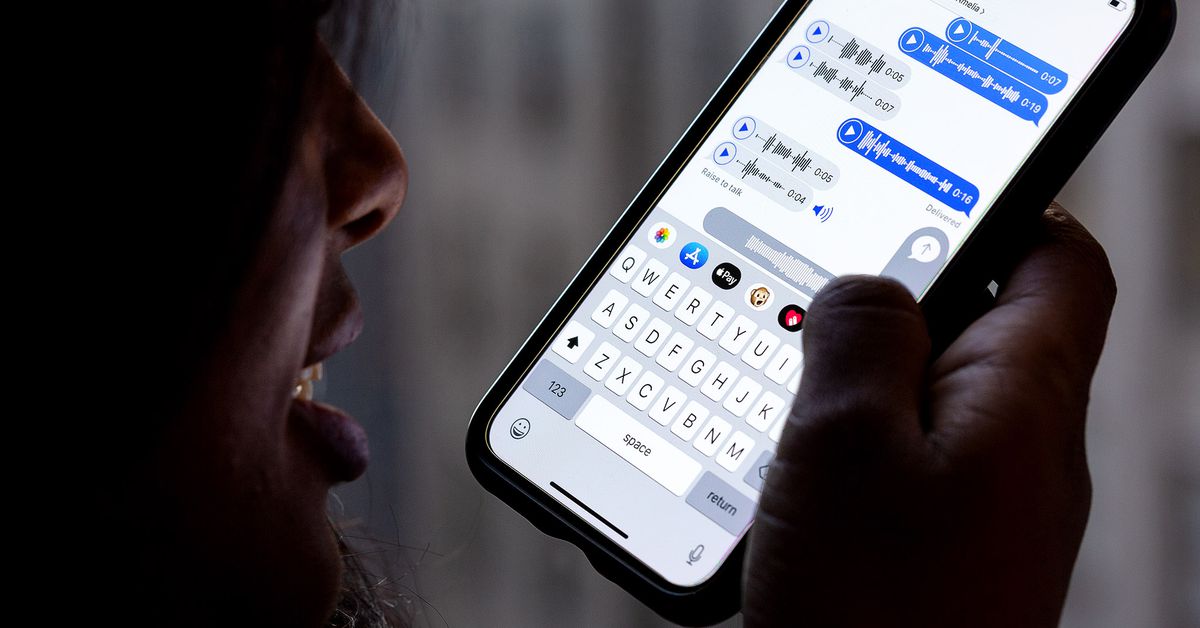 Over the past few months of peak TV, the voice message has emerged as one of my favorite ways to talk about what I’m watching. I’ll finish this week’s episode of Andor, mute the show’s credits, and immediately start recording a voice message of my thoughts to send to a friend.

The main reason we use voice messages (or voice notes, depending on where you are in the world) is their asynchronicity — we don’t have to both be free at the same time to communicate. Sometimes, he’s managed to watch the episode hours or even days before me and has already sent a message for me to listen to, while other times, I’ll be the first one to share my thoughts. But every week, the format is the same. The recording starts with a spoiler warning, and then we share what we like, what we dislike, and where we think the show is going in the future.

Yes, the messages are rambly. Yes, they’re full of half-formed thoughts and tangents. And yes, we’re definitely using them because we can’t be bothered to type out everything we want to share. But that’s the point. Each recording contains an unfiltered first impression of an hour of TV, where you can hear someone working out how they feel about an episode in real time. They offer much of the immediacy and intimacy of a phone call without having to be available at the same time.

I am not alone in my love for voice messages. WhatsApp, the most popular messaging app in the world, reported earlier this year that its users send 7 billion (with a b) voice notes every day. That’s a lot of people sharing their hot Andor takes.

And yet, almost as popular as voice messages themselves are articles about how awful they supposedly are. In 2018, TNW called them “the most poisonous piece of audio that has ever occupied megabytes on my phone,” and a year later, HuffPost said they’re simply “terrible.” A writer with The Guardian recently shared an embarrassing story about trying to flirt with a crush over voice messages before wondering if it’s “self-indulgent” to think that “people care to listen to you talking for a long time — indeed, any length of time — without interruption.”

But the more I drill down into any “I hate voice messages” piece, the more I’m convinced that people’s complaints aren’t actually about voice messages at all. Take this section from a recent article in Metro, which called voice messages “rude, arrogant and a waste of everyone’s time:”

I had a colleague who would leave four, five-minute-long voice notes informing me of all his views on how the industry was working, what I needed to do, what he wanted to do, and why everyone else was wrong.

He’d send me voice-notes at weekends and while I was on holiday, so, in his mind at least, he had kept me updated with what was happening.

Work messages? Containing action points? Sent over the weekend and while you’re on holiday? My friend, these are not bad voice message problems. These are bad colleague problems.

There are good and bad ways to use any form of communication, an (often unwritten) etiquette that plays to a medium’s strengths and avoids its weaknesses. There are work meetings that could have been emails, emails that could have been Slack messages, and Slack conversations that were probably important enough to get on a Zoom call for.

Even once you pick a medium, there are best practices. Specific instructions in a work email are often broken out into bullet points rather than buried in a wall of text. Some WhatsApp messages work better as one long message; others are easier to read and respond to when they’re broken up.

I completely agree that there are some terrible voice message users out there, but it’s nothing that’s unique to them. Burying important information three minutes into a rambly recording is a recipe for that information to be forgotten. Discussing what your cat eats for breakfast was going to be boring regardless of the medium you used to send it. And if The Guardian thinks that embarrassing yourself while talking to a crush is a problem exclusive to voice notes, then I have numerous text messages that suggest otherwise.

In an effort to rehabilitate the humble voice messages, here’s a first stab at some best practices:

Address these pitfalls, and voice messages are as rich a communication medium as any other. At their best, they offer the length of a written letter mixed with the intimacy of a phone call and the immediacy of an instant message. I love voice messages. I love the familiarity of hearing someone’s voice, the precision with which you can show the emotions behind your words without having to think too hard about punctuation. But most of all, I love their effortlessness. After all, communicating with friends and family on a whim is always better than not communicating at all.