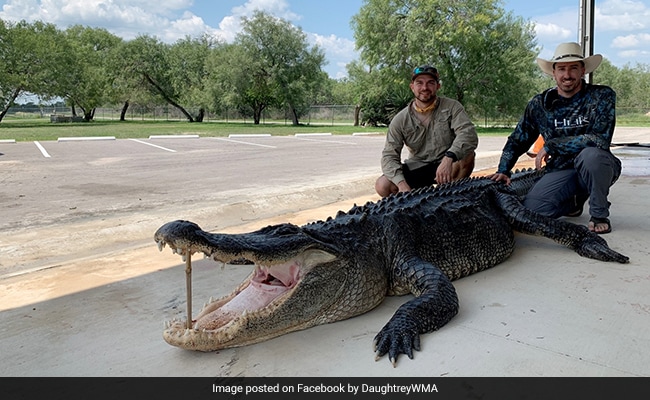 Internet users congratulated the hunters on a “once-in-a-lifetime gator”.

Hunters in the United States have killed a 14-foot “once in a lifetime” alligator as part of this year’s hunting season in Texas.

Taking to Facebook, James E. Daughtrey Wildlife Management Area shared a photo of the hunters posing alongside the dead alligator. In the caption, the officials informed that the male alligator weighed 781 pounds (about 345 kg) and was 14 feet, 2.5 inches long.

In the image, the reptile can be seen lying on the ground with its mouth propped open with what appears to be a wooden stick.

In the comment section, internet users congratulated the hunters on a “once-in-a-lifetime gator”. “Awesome harvest,” wrote one user. “Wow! He is huge,” wrote another.

According to Newsweek, male alligators tend to be around 11.2 feet long. The largest alligator ever caught was 15 feet, 9 inches – caught by an Alabama woman in 2014.

Meanwhile, last month, two brothers, Jim and Richie Denson, caught an alligator in Mississippi state which officials believed was 100 years old. The 10-foot-2-inch creature was caught on the Pearl River. The reptile broke the state record for the longest female alligator, officials said on Twitter.

In a press release, Riky Flynt, alligator program coordinator of the MDWFP informed that the alligator was first tagged by biologists in 2009 and is known as “Yellow 410”. “We tagged this alligator on June 11, 2009, as part of a research project. At that time, the alligator also measured exactly 10 feet, 2 inches, and was captured within 100 yards of where the Densons killed the record alligator,” he said.

He added that while it is not clear how old Yellow 410 was when she was first captured in 2009, she did not grow even one inch since then.