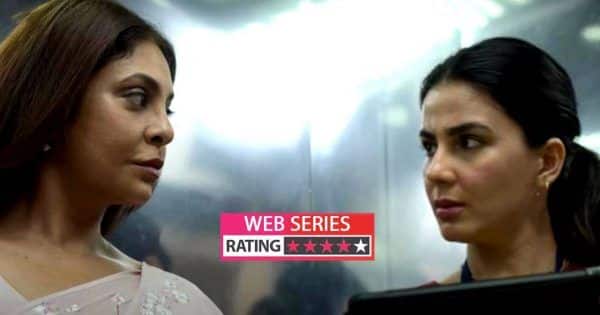 While Bollywood, be it the big screen or OTT world has been prone to dishing out edge-of-the-seat thrillers every now and then (yes, it’s the one genre we actually excel at both critically and commercially since the late 1950s, go check the archives if you don’t believe me) on an array of subjects, but the one avenue that hitherto remains unexplored is the medical-themed thriller. Barring the stupendous Ankur Arora Murder Case back in 2013, nothing, or at least, nothing of note comes to mind. In such a scenario, Disney+ Hotstar has come up with their new web series Human, starring two of our country’s most underrated actresses, Shefali Shah and Kirti Kulhari. So, does it manager to breathe life and interest in medial-themed thrillers? The response to that is a resounding ‘YES’! – Human: Kirti Kulhari reveals if people might avoid COVID-19 vaccines after watching her web series [EXCLUSIVE VIDEO]

Dr. Saira Sabarwal (Kirti Kulhari) is recruited in Dr. Gauri Nath (Shefali Shah)’s cutting-edge hospital in Bhopal, where she’s hailed as a messiah and along with her husband (Ram Kapoor), hold immense sway over the length and breath of the city in all the important places. At the same time, human trials for a precarious new drug are being conducted not in the most ethical of ways, which sees Saira slowly but surely being drawn deeper into the medical maleficence that unfolds.

Watch the Human trailer below:

Human hits hard where it matters most by tapping into the doubts many have over COVID-19 vaccination and how safe they are. It does so though with sensitivity sans any sensalisation, keeping us glued to our seats with a layered, well-researched narrative of an uncharted underbelly of medical science, steering well clear of gimmicks, shortcuts or shock value to make its point. Yes, Human is shocking, but it shocks you with a detailed plot and mysterious characters rather than sudden detours, and frankly speaking, such shocks leave a far more indelible impact. It’s also telling how sublots like feminism, class divide and the Bhopal gas tragedy are inculcated in the script and help influence the story.

Of course, not half of this would’ve been achieved if Mozez Singh and Vipul Amrutlal Shah didn’t have the actors to back them up, with Shefali Shah delivering a performance for the ages, delving deep into the cerebral complexity of her part, emerging with a tour de force that has us pondering long after. Shefali is versatility in a bottle; compare her acts in Dil Dhadakne Do, Delhi Crime and this, and you’ll feel like you’re watching three different performers with the same countenance. Kirti Kulhari is a perfect foil to her and never ceases to amaze us with how she keeps reinventing herself like a breath of fresh air yet never goes overboard.

It also pays that these two ae enveloped by a top-notch supporting cast, including Vishal Jethwa, Seema Biswas, Ram Kapoor, Aditya Shrivastava, plus a veteran like Mohan Agashe. It further pays when the technicalities of an OTT project are also as polished as they’re in Human, with the production design, color schemes, cinematography and background score all being top-drawer stuff.

Without revealing much, there’s a plot device that deals with pain inhibition in an individual’s cerebral cortex that may pass off for those who haven’t seen or read much about it earlier but will stick out like a sore thumb with its presentations to those who know a thing or two about it. Besides that, Human, too, falls in the trap of what’s plaguing most Indian web series these days – being stretched for too long as the show could’ve easily been trimmed to half an hour per episode or eight episodes instead of ten at the original length per episode. Also, while the feminist themes are strong and pertinent, they do make the folly of skirting misandry at times.

Shefali Shah is first rate in a highly complex and tough role, Kirti Kulhari never ceases to surprise and is a perfect foil to her, they’re surrounded by a supporting cast to die for, and even if the performances weren’t that good, Disney Hotstar’s new web series, Human, would still make for a brilliant, binge-worthy watch as a top-notch medical thriller. I’m going with 4 out of 5 stars.

Say What! Siddhant Chaturvedi’s cousin’s girlfriend once flirted with him? , TheSpuzz