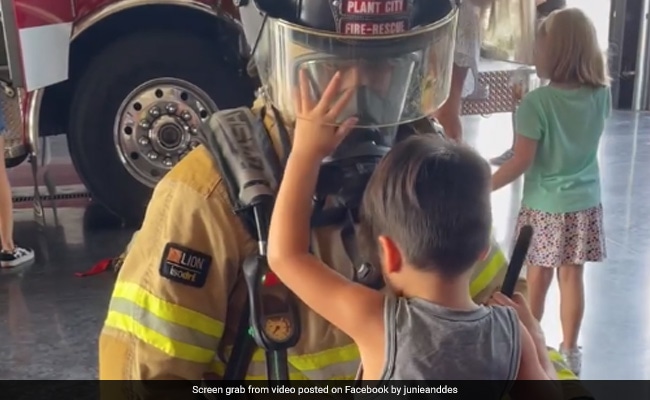 A woman has posted a video on Facebook of her visually impaired son getting the chance to “see” a firefighter by feeling the equipment and uniform with his hands. The clip has attracted a lot of attention online with users calling it beautiful and thanking the firefighter for allowing the boy to have that experience. The woman named Destiny Fiaschetti runs the Facebook page ‘Adventures of a June Bug’ (a personal blog) where she keeps posting photos of her son Junie and describing his experiences.

“Little man was able to attend a homeschool field trip at a Plant City Fire Station! He of course loved every second of it. He toured the station, heard dispatch over the speakers, explored the fire truck, and heard the sirens!” Ms Fiaschetti said in her post.

“His favorite part was spending time with this patient fire fighter who allowed Junie to feel all over his uniform and gear, touch whatever he wanted, hear the sounds his equipment made, and answered all of his questions! Afterwards he walked him to the fire truck as well,” she added.

According to CNN, Ms Fiaschetti adopted Junie in 2020 after fostering him for 16 months. She told the outlet that the purpose of making the video was to tell the world that not having vision in the eyes is not a bad thing. The woman further said she wanted to show how the world appears from Junie’s perspective.

“This is beyond awesome! What a patient firefighter and how delightfully curious Junie is,” a user commented on Facebook.

“What a wonderful fire fighter to explain everything and to let Junie explore,” another added.

Others left several heart emojis in the comment section to express their happiness.