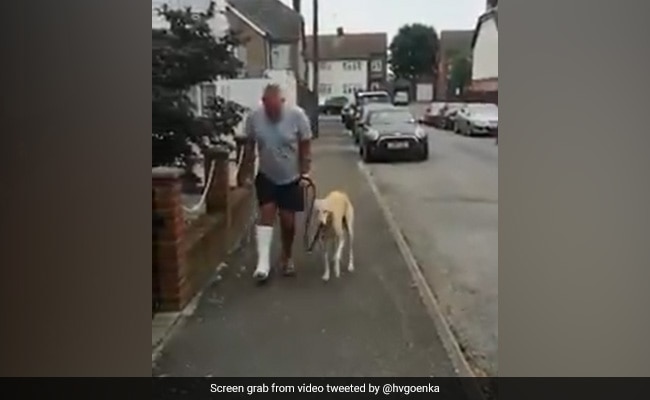 The video has accumulated more than 9 million views.

There is no dearth of videos online that showcase dogs imitating their humans when they get injured. And a recent viral video shared by Industrialist Harsh Goenka is a case in point.

The moving video showed a man on crutches walking with his beloved pooch who was trying to imitate him in order to show sympathy. “Dogs always follow their master,” Mr Goenka captioned the Twitter post.

The short video showed the dog hopping along the street with one paw raised above the ground, thereby mimicking his owner’s movements perfectly. While the owner was seen walking slowly due to his fractured right leg, the pooch was seen walking with him at the same pace.

Since being shared, the video has accumulated more than 9 million views. “How cute ! Only a dog lover will truly understand a dogs unconditional love for his masters!!” wrote one user. “Always best & reliable companion. Acts like a family member,” added another.

A third said, “That is why they (dogs) are called faithful.” A fourth simply commented, “Dogs inspire humans.”

Meanwhile, Harsh Goenka is known for sharing interesting posts with his 1.7 million followers on Twitter. Last month, he shared a video showing a mother cycling on the road with a special child seat for her kid.  The mother made a backseat with a small child-size plastic chair that was tied to the cycle. The video showed both the child and mother comfortably sitting and enjoying the ride.

The clip garnered more than 1.4 million views and over 5,000 comments. Internet was highly impressed with the woman’s creativity.