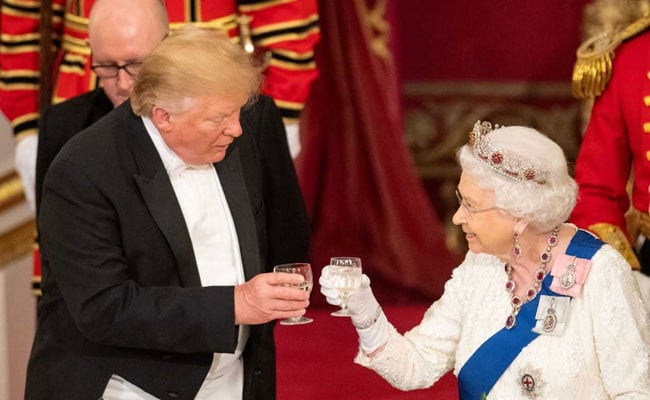 Former US President Donald Trump has said that Queen Elizabeth and Duchess of Cornwall Camilla were competing against each other at a royal banquet in 2019. He made the startling claim at television presenter Piers Morgan’s new show on Talk TV.

Mr Trump said he was in the company of Camilla, the Queen, his wife Melania and other children during an event at the Buckingham Palace in June 2019.

“She (Camilla) was on my right, the Queen was on my left, and I said ‘Queen, I will have to talk to Camilla for a little while too’. We couldn’t break apart,” Mr Trump said, according to a clip of the show posted by Mr Morgan on Twitter.

BREAKING: President Trump on his massive royal dinner dilemma: ‘I said, Queen, I really have to talk to Camilla for a little while too!’ Part 2 of my sensational interview airs on ⁦@PiersUncensored⁩ tonight at 8pm. Don’t miss it! 👇👇👇 pic.twitter.com/PQG8fUXERw

“Camilla was funny, she was smart, she was quick, she was great. I like her too. I like Charles,” the former US President further said.

Mr Morgan is then heard asking Mr Trump if Charles and Camilla will make a good King and Queen when the time comes. “’I hope so. I think it’s going to be tricky because they are truly replacing a legend when you talk about this woman (the Queen),” said Mr Trump.

The 75-year-old former US President also claimed that the Queen “had a good time” when he was sitting next to her at the state banquet.

“I sat next to her and we talked the whole night. And somebody said ‘we’ve never seen her smile so much’. We had a great time. She was laughing and smiling,” he said in another clip.

“I have a lot of respect for the Queen, she’s incredible.”

“They said they’ve never seen her have such a good time at a state dinner. You know, normally they’re a little boring. Okay, this wasn’t boring,” added Mr Trump.

The former President said he has a lot of respect for the Queen, that she is incredible and loves her country. But he took a dig at Prince Harry and Meghan Markle’s relationship, saying that the Prince is “whipped” by Meghan. He accused Prince Harry of being “so disrespectful to the country”.