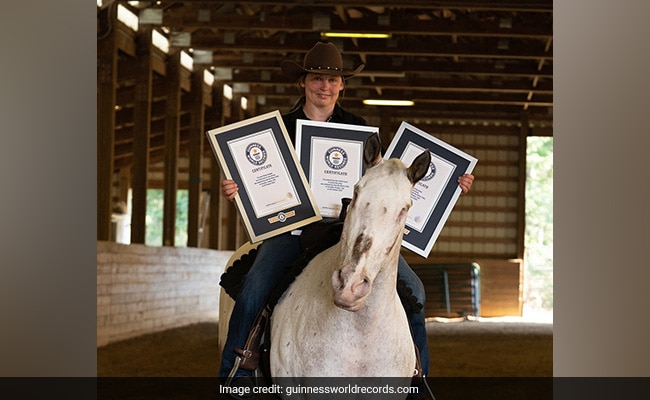 The 22-year-old Appaloosa known as “Endo the Blind” set the three records in October.

Endo, a blind Appaloosa horse from Oregon in the United States, along with his owner achieved three remarkable record titles, according to the Guinness World Records (GWR). As per GWR website, the horse “is touching the world with more than just his good-natured demeanour and striking brown speckles.”

The 22-year-old Appaloosa known as “Endo the Blind” set the three records on October 29, 2022, working with his owner Morgan Wagner. The records include highest free jump by a blind horse, most flying changes by a horse in one minute and fastest time for a blind horse to weave five poles

The owner said that she was aged 13 when her grandmother promised her that she could have her very own horse and the fascinating foal caught her eye. “I first met Endo on my grandma’s farm when my family and I moved up from California to Oregon. My grandma said I could have one of her horses, and I chose Endo. He had the most charisma and pranced around the other horses,” Ms Wagner told GWR.

There was no obstacle that their great friendship couldn’t overcome- from their very first dressage and riding experiences together to mastering trotting over some of the roughest patterns and obstacles.

She observed Endo’s eyes were frequently watering up and squinting when he was eight years old. A veterinarian diagnosed Morgan’s beloved horse with equine recurrent uveitis, often known as moon blindness or periodic ophthalmia, after having examined him. The illness is one of the most common disorders of the equine eye and the leading cause of blindness in horses worldwide.

Unfortunately, Endo’s pain persisted, and when his right eye ruptured, Ms Wagner had to make the exceedingly painful choice to remove it. Endo had to learn how to get around in a world he couldn’t see after his left eye started to cause him issues within a few months and had to be removed as well.

“And so, Endo, the horse who once faced new challenges with courage and determination, became Endo the Blind,” states GWR‘s website.

With small steps and lots of love from the horse’s friends, family and the owner, it soon recovered.  “He learned to jump again after going blind because he competed in a discipline that required upper-level riding and obstacle work, and in that discipline, he became national champion at the highest level,” the horse owner continued. She hopes that Endo’s story will inspire the equine world to emphasise the abilities of blind horses rather than their limitations.