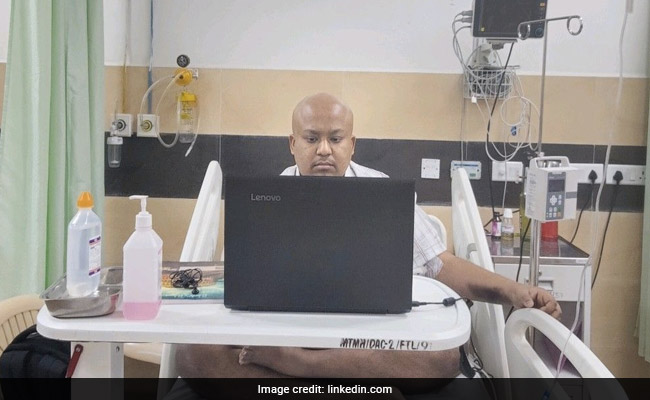 A cancer patient giving a job interview during one of his chemotherapy sessions has inspired several internet users. Taking to LinkedIn, IT professional Arsh Nandan Prasad shared his struggles with getting a job due to his medical condition. He stated that he doesn’t need sympathy but wants to prove himself.

Sharing a photo of himself sitting in a hospital bed – dressed in a medical gown, Mr Prasad spoke about being rejected by interviewers. The IT professional, who lost his hair as a consequence of chemotherapy, described how he was not getting selected just because he was going through one of the most difficult times of his life.

Mr Prasad wrote, “When you give your best in the interviews but are not selected for the mere fact that you are going through a rough patch in life certainly shows how generous these companies are. As the recruiters come to know that I’m fighting cancer, I see the change in their expressions.”

“I don’t need your sympathy!! I’m here to prove myself. Just a recent pic of me giving an interview during my Chemotherapy sessions,” he added.

Mr Prasad’s post saw hundreds rallying behind the “warrior”. His post got viral instantly with many hailing his courage and others offering words of encouragement and support. The IT professional also saw a job offer come in from Nilesh Satpute, the CEO and founder of Maharashtra-based tech company Applied Cloud Computing.

Mr Satpute asked Mr Prasad to stop searching for jobs and continue his treatment. He called him a “warrior” and told him to join his company whenever he is fit to join. “There will be no interview,” Mr Satpute added.

Several other users also left comments on the LinkedIn post to cheer up Mr Prasad. One user said, “This is the fighting spirit. Salute to you.” “Sending up prayers of healing for you. I truly admire your tenacity,” added another.