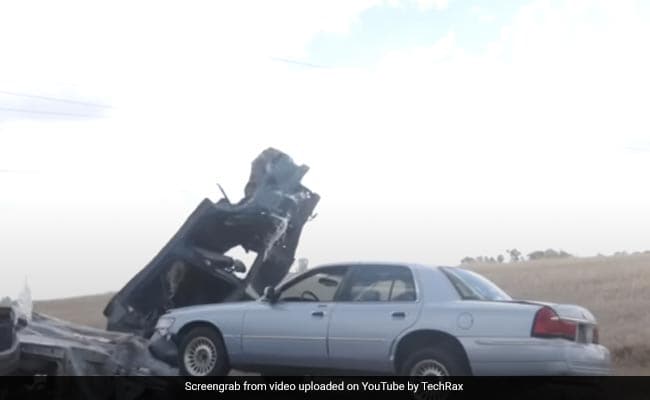 Apple launched iPhone 14 amid much fanfare earlier this month. Like every iteration of the iPhone, this new flagship also came loaded with a bunch of features, including satellite calling. But one of the most talked about feature is crash detection which is available in all the four models – iPhone 14, Plus, Pro and ProMax. But a YouTuber decided to test if the claims made by Apple are true.

According to Apple, crash detection allows phone to detect severe car crash and automatically starts dialing emergency services, along with notifying the user’s contacts. In order to test it, a real car crash was needed. And the owner of YouTube channel TechRax did just that.

He shared a video that shows how he tested the new feature. The YouTuber strapped a brand new iPhone 14 Pro to the headrest of the front seat of a 2005 Mercury Grand Marquis sedan, which was being remote-controlled.

The car was then crashed into a pile of old vehicles to create the scenario in which the phone will actually detect the accident and alert the emergency services.

The YouTuber slams the car twice into the pile of old vehicles and both the times, the phone’s feature works. Though delayed, by 10 seconds according to the YouTuber, the iPhone launched the SOS mode and displayed a countdown before connecting with the emergency services.

The feature automatically gets activated when the phone owner is involved in a car crash. The countdown is meant to determine if the user is unresponsive and if the cancel prompt is not pressed within the stipulated time, the iPhone will inform emergency services about the mishap. The feature has also been added to the new Apple Watch Series 8.

The iPhone 14 and 14 Plus will have the A15 bionic chip, while the Pro models come with the A16 chip.