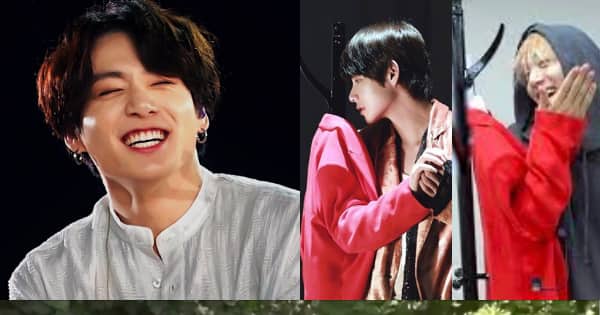 BTS’ Golden Maknae Jeon Jungkook is a boy of many talents. The 24-year-old idol is one of the most popular members of the international K-pop sensation BTS. He is very creative when and upbeat about everything. He has a natural flair for sketching and painting. He is also very talented at physical tasks, games and often gives his hyungs a hard time who eventually try to beat Jungkook at them. He loves to explore and add to his skill set and would take up skills but eventually drop because he is too lazy to keep up. However, whatever he does, he aces it. And he also aces at imitating everyone. And if you thought that Jungkook only imitates his hyungs, then you are highly mistaken, the bunny boy will imitate everything around him. Jungkook’s most famous imitation is that of the old man from Korea and the way he had said Rap Monster (read Rrrrrap Monster). – Trending Hollywood News Today: BTS member Taehyung to lend voice for BFF Choi Woo Shik, Taylor Swift and Kanye West’s last-minute additions for Grammy Awards and more

In the saga of Jungkook imitating his hyungs, in one of the Run BTS episodes, when the BTS members had been divided into teams with T1 players, Jungkook had imitated Jimin (Park Jimin). He sand Boy With Luv ditto like Jimin who didn’t mind as JK looked cute while doing so. Another time, during one of their overseas interviews years ago, Jungkook was asked to imitate anyone from the band and he had imitated Suga’s dance. That’s not it, he can also imitate Suga’s dad. Yes, you read that right. – BTS: South Korean legislature divided over the band’s military service exemption – deets inside

BTS ARMY knows how much Jungkook loves to tease his hyungs, so he often initiates the choreographies of individual band members. Be it V aka Kim Taehung in singularity, Jimin in Black Swan or Jin aka Kim Seokjin in Butterfly, he would tease his members and cheer them up during hectic schedules. Jungkook also loves to imitate the hook step in BTS’ song Fire the way Jimin does it. In yet another imitation saga of the Run BTS episode, BTS had to guess their own songs which were read out loud in different accents, and Jungkook had started imitating the voice machine. And that’s not it, he would also imitate a chicken if he’s bored. Check out the videos of Jungkook imitating everyone and everything here: – BTS: When Japanese singer Yuiko told RM, ‘Thank you for kissing me’ on stage and the leader was left blushing — read deets

Meanwhile, BTS’ RM, Jin, Suga, J-Hope, Jimin, V and Jungkook are enjoying themselves in LA. In three days, they will be performing at the Sofi Stadium in LA in front of the ARMY. BTS’ Permission To Dance on Stage in LA concert will happen on 27th, 28th November and 1st and 2nd December.