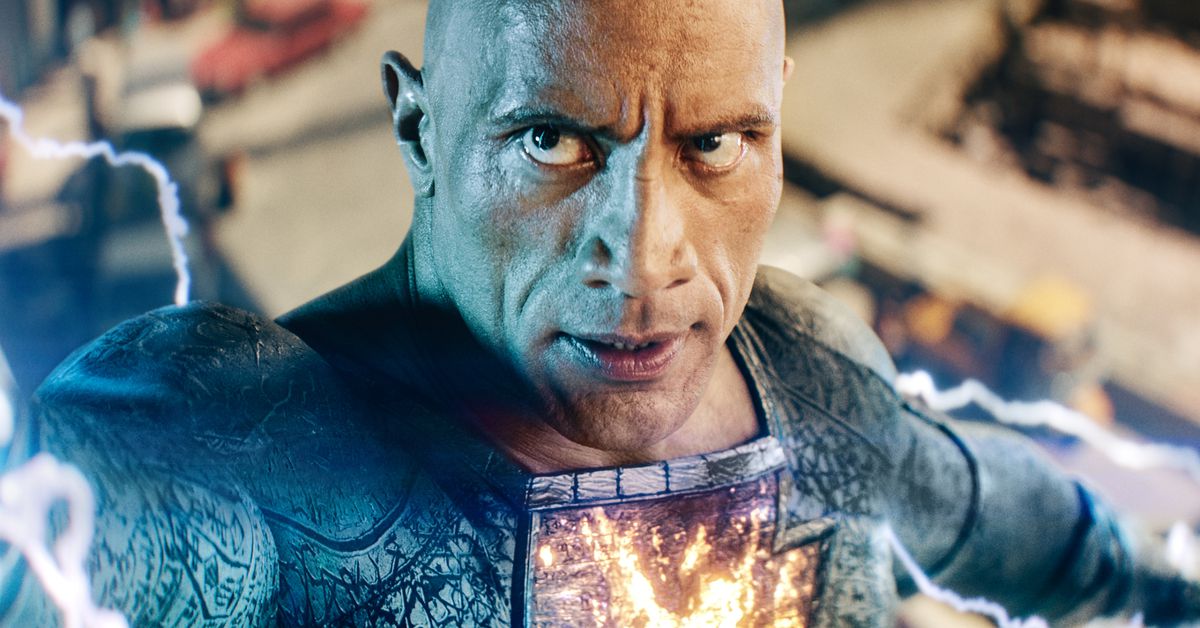 Black Adam, Warner Bros.’ latest superhero movie based on DC’s comic books, has been in the works ever since the studio first came around on the genuinely inspired idea of casting Dwayne “The Rock” Johnson as a terrifying Superman analogue best known for beefing with children. In Black Adam, you can plainly see how much hope and faith Warner Bros. has placed in the idea that a darker, more brutal antiheroic figure might be just what its beleaguered cinematic universe of cape films needs to pull itself out of what seems like a death spiral. What’s harder to see, though, is how anyone at Warner Bros. looked at the completed Black Adam and didn’t immediately recognize it as yet another sign of what a messy place the DCEU’s become.

Black Adam, from director Jaume Collet-Serra, tells the story of Teth-Adam (Johnson), an ancient, magically empowered demigod who first walked the Earth as a mortal man thousands of years ago in the fictional Middle Eastern country of Kahndaq. Though the bulk of Black Adam is set in present-day Kahndaq and follows Teth-Adam as he confusedly tries to understand what became of his nation after he vanished one day in the past, the movie also repeatedly flashes back to his life as an ordinary man in order to make you understand what it is that drives him to be the way he is.

Before Teth-Adam became a hulking, invulnerable thunderstorm shaped like a professional wrestler, he was one of the countless enslaved Kahndaqi forced by their tyrannical king to mine their land for its Eternium, a glowing rare metal whose properties are never really spelled out. Brutal as life under their king was, no one ever dared to rise up against their oppressors for fear of death. But Black Adam’s earliest scenes detail how that all changed one day thanks to Teth-Adam’s son Hurut (​​Jalon Christian) — a young boy whose act of defiance sparked a revolution and subsequently led to his death.

Though Black Adam’s backstory has always been an important part of understanding him as a character, the movie’s way of gradually teasing out what happened to his family while also playing coy about some rather obvious details is one of the first signs that Black Adam’s script isn’t firing on all cylinders. It’s not hard to figure out the big secret Black Adam’s hiding in the present day after professor Adrianna Tomaz (Sarah Shahi) wakes him from a centuries-long sleep by saying the word “shazam.” And to be fair, Black Adam doesn’t try all that hard to keep the secret hidden or make it intriguing because, once Teth-Adam’s up and operating in modern Kahndaq, the movie shifts gears dramatically to focus on giving its protagonist the flashiest, most murder-filled debut the DCEU’s had yet.

In the same way that Teth-Adam often beats his enemies with his fists, Black Adam beats you over the head with the idea that Kahndaq has been repeatedly besieged, occupied, and in desperate need of a Hero™ over the ages. Were it not for Tomaz’s cape-obsessed son Amon (Bodhi Sabongui), it might take longer for Teth-Adam to understand how superheroes like Superman, Wonder Woman, and Batman are to the modern world what the Champion of Kahndaq once was to his own home country. But when Teth-Adam comes face-to-face with the first of the many groups of soldiers sent to neutralize him after he wakes up, Black Adam starts doing what pretty much every American superhero movie does: find a multitude of different ways to make murder look cool.

As many superheroes as there are in DC’s catalog of IP, there are only but so many imaginative ways that Hollywood’s developed to bring them and their powers to the big screen. Rather than placing Teth-Adam into imaginative situations designed to show off his power set, Black Adam instead features an overabundance of visceral 300-style action sequences that slow down and speed up in order to accentuate how unbothered the demigod is as he’s zapping people with lightning or tossing them into the sky before their spines are crushed. But because the movie never really tries to establish what Black Adam’s worldview is or how he feels about… anything, its attempt at framing him as a solemn, self-assured arbiter of justice instead makes him come across like an uncharming sociopath à la Brightburn.

A big part of what makes Black Adam feel like such a weird misfire is how undeniably charismatic we all know Johnson is capable of being even when he’s portraying characters that you aren’t exactly meant to see as “good” people. You can see shades of that magnetism and how much more compelling it might make Teth-Adam as Black Adam introduces a curious new version of the Justice Society of America consisting of Carter Hall / Hawkman (Aldis Hodge), Kent Nelson / Doctor Fate (Pierce Brosnan), Maxine Hunkel / Cyclone (Quintessa Swindell), and Albert Rothstein / Atom Smasher (Noah Centineo).

It’s when the JSA shows up in Kahndaq to fight Teth-Adam that Black Adam remembers how fun and exciting superhero stories can be no matter how serious their main characters are. In sharp contrast to the uninspired way Black Adam shows off Teth-Adam’s strength, the movie’s action sequences featuring Cyclone’s sky-dancing aerokinesis and Doctor Fate’s theatrical parlor tricks are some of its most memorable. Hawkman’s never really needed the sort of rebranding that made everyone take the DCEU’s Aquaman more seriously, but Hodge’s Hall exudes a magnetism and worldliness that immediately makes you want to know more about him, his team, and what kind of presence they have outside of Black Adam.

But the JSA’s arrival in Kahndaq, and the way Black Adam pits them against Teth-Adam, has an unfortunate way of highlighting how hesitant the movie is to say what it really wants to say about our pop cultural obsession with mythic superhumans sworn to protect us. It would make all the sense in the world for Teth-Adam to have nothing but fury and thunderbolts for foreign vigilantes coming into his home. But Black Adam stops short of being that logical, both because Warner Bros. knows how irredeemable it might make the character seem in people’s eyes and because the studio has some rather obvious plans for him in the future.

For those who’ve been waiting for a big, bombastic celebration of how powerful Black Adam is that also strips away most of the narrative context that makes him work in DC’s comic, neither Black Adam nor its mid-credits scene will disappoint. But for anyone hoping that Black Adam might actually herald a new era of quality and substantive superhero features from Warner Bros., there’s always the chance that the next movie he pops up in might be a good one.