Bhool Bhulaiyaa 2: Ranbir and Abhishek promote Kartik’s film as they do the hook step of the title song 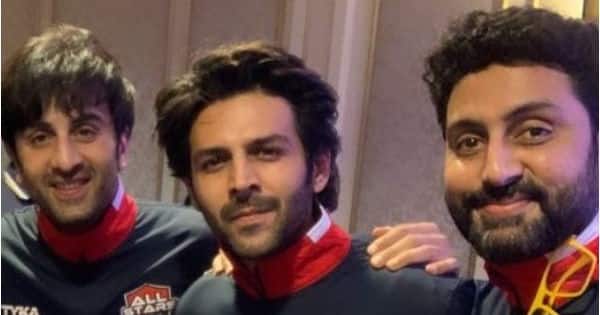 Bhool Bhulaiyaa 2 starring Kartik Aaryan, Tabu, and Kiara Advani is all set to release on 20th May 2022. The trailer of the film and the title track has created a good pre-release buzz, but the makers are leaving no stone unturned for the promotion of it. Amid the promotions, Kartik recently flew down to Dubai with Ranbir Kapoor, Abhishek Bachchan, and others to play the Celebrity Football Cup 2022 match. Well, during a press conference there, Ranbir spoke about Bhool Bhulaiyaa 2, and later, he and Abhishek did the hook step of the title song. The video of the same has gone viral on social media. Check it out below… – Mother’s Day 2022: Divya Agarwal reveals how her mom keeps her grounded; says, ‘Never forget where….’ [Exclusive]

Well, netizens are loving Ranbir and Kartik’s banter and they want to watch them in a film together. A netizen commented, “RK AND KA! My favourites.” Another fan wrote, “Them in a movie pls.” The fan club who shared the video captioned it as, “Mujhy in dono ki apas me vibe boht cool lagti hai yaar.” It’s good to see the bonding between these stars. – Vicky Kaushal-Katrina Kaif, Ranbir Kapoor-Alia Bhatt and 7 more celeb couples who grabbed headlines for their PDA [View Pics]

Bhool Bhulaiyaa 2, which is directed by Anees Bazmee, won’t be getting a solo release at the box office. The movie will be clashing with Kangana Ranaut starrer Dhaakad. Recently, while talking about the clash, Kartik had stated, “Thankfully, both the films are of different genres; you can see that from the trailers themselves. From the business point of view, we are getting great openings on Friday as the audience is rushing to the theaters to watch the films. I liked the Dhaakad trailer and Bhool Bhulaiyaa 2’s too, so there will be a set audience for both the films. I don’t look at it as a competition, but as an ‘and’, so please watch both the films.” – Alia Bhatt and Ranbir Kapoor wanted a foreign destination wedding; Neetu Kapoor spills the beans [Read Deets]