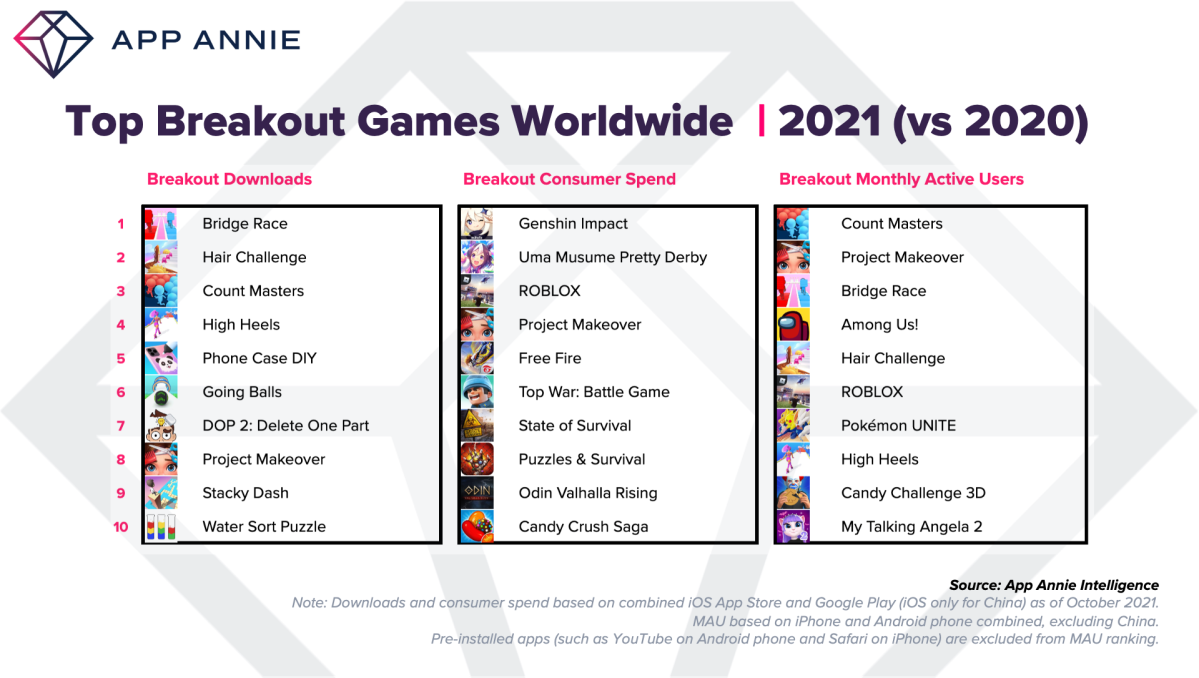 Mobile gamers and app users have increased their overall spending in 2021, as the ongoing pandemic has spurred the widespread adoption of a mobile lifestyle, according to analytics and data firm App Annie.

This is in keeping with previous App Annie forecasts that projected spending for the year would surpass $120 billion. Of the two major mobile stores, the App Store dominated, with 65 cents of every dollar spent by iOS users. On the other hand, the Google Play store led in number of app downloads, with over 100 billion projected by the end of the year.

Gamers spent the most money out of any user, accounting for around 60% of revenue on iOS and 80% of dollars spent on Google Play.

According to App Annie’s data, the top breakout game of 2021 in terms of downloads was Bridge Race, closely followed by the likes of Hair Challenge, Count Masters, and High Heels. All of those games also appeared on the list of breakout games by monthly active users (MAU).

In a separate table for breakout games by MAU, more “mainstream” titles like Among Us, Roblox, and Pokemon Unite ranked fairly well in every market. League of Legends: Wild Rift and Genshin Impact also ranked highly, with the latter topping the list of breakout games by consumer spending. In terms of game genres, spending on 4X strategy games, RPGs, and simulation games has increased in 2021. Idol training sims is one niche genre that saw a huge increase, with 110% growth (Uma Musume Pretty Derby is a specific game of the genre given as an example).

Roblox was noted in the report to be more like a platform at this point than just a game. According to a previous App Annie report forecasting 2022, metaverse mobile games are projected to make $3.1 billion in annual spend.

Gaming is also helping app spend in other ways, as platforms traditionally associated with game streaming are dominating App Annie’s charts. Twitch, YouTube, and Bigo Live are all among the top apps of the year in terms of global spend. TikTok is the current top streaming app.

Lexi Sydow, App Annie’s head of market insights, said of the livestreaming trends in an interview with GamesBeat, “It’s the ‘authentic’ side of things. Livestreaming touches on that nerve that TikTok as a general platform has helped with. It’s less about glamorizing your life and more about that authentic connection.”