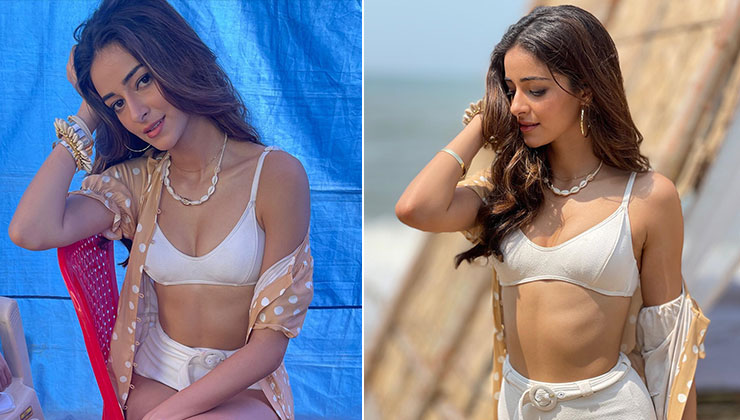 Ananya Panday is one of the most loved actresses of Bollywood. She is currently making headlines because of her upcoming film Liger. She is playing Vijay Deverakonda’s love interest in the film. Vijay and Ananya’s chemistry is on point. As the film is all set to be released, Ananya keeps sharing BTS photos from the sets of Liger. Speaking of that, Ananya shared a bunch of new photos from Liger sets. In the photos, Ananya can be seen flaunting her toned body.

Dressed in a white bralette and matching shorts, Ananya is too hot to handle. The actress’ look is from the song Aafat. Aafat released recently and it won fans’ hearts. Ananya and Vijay’s chemistry is too hot and left fans impressed.

Ananya shared the pictures and wrote, “Expectation vs. Reality was tryna have my Heroine moment but I got attacked by feathers and my hair got stuck in the blower instead, Reacting to her post, a fan wrote, “sexy, Another fan commented, “My cutie, ,You are an icon of beauty,” wrote a fan. Another fan dropped a comment saying, “So hot,

Talking about the sports action film, Liger also stars Ronit Roy and Ramya Krishnan. Mike Tyson has made a cameo appearance in the film. Liger is slated to release on 25th August, 2022. Ananya and Vijay are currently busy promoting the film.

Ananya has interesting projects in the pipeline. The actress will be seen in Kho Gaye Hum Kahan. She will be sharing screen space with Adarsh ​​Gourav and Siddhant Chaturvedi. The film was announced in September last year.