“Airlift Part 2.0”: Man Sits On Scooter As It Hangs In Air While Getting Towed 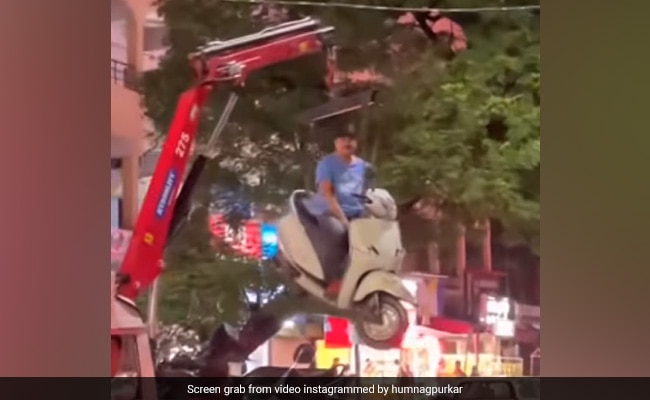 Picture shows the man sitting on his scooter while getting it towed away.

A video from Nagpur in Maharashtra is attracting attention on social media. It shows a man sitting on his scooter, which is hung in the air while being towed away.

Shared by a page named Humnagpurkar on Instagram, the video opens with the man sitting on the two-wheeler asking the driver of the towing vehicle to put him and his scooter back on the ground.

The video was shared on July 19 but is going viral now. Many users were in splits after seeing the man’s commitment to his scooter, as he refused to let go of the vehicle when it was being loaded onto a recovery truck. The tow truck can be seen keeping a few more two-wheelers on its cargo bed.

According to the post, the incident took place in Sadar Bazar area of Nagpur. What makes the clip even more intriguing is that the man doesn’t seem to be perturbed while sitting on a scooter floating in the air. As shocked passersby watch the event, he is seen talking to the people in charge of the tow truck.

Since being shared, the video has amassed over 2.8 million views and more than 83,000 likes on Instagram. Several users have mocked the man for not leaving his scooter while others can be seen being aggressive about the people who park their vehicle in no parking areas.

“Airlift part 2.0,” a user wrote, while another said, “He loves his bike more that his life thats my boy.”

A third user wrote, “At first glance I thought he is Tarak Mehta.”