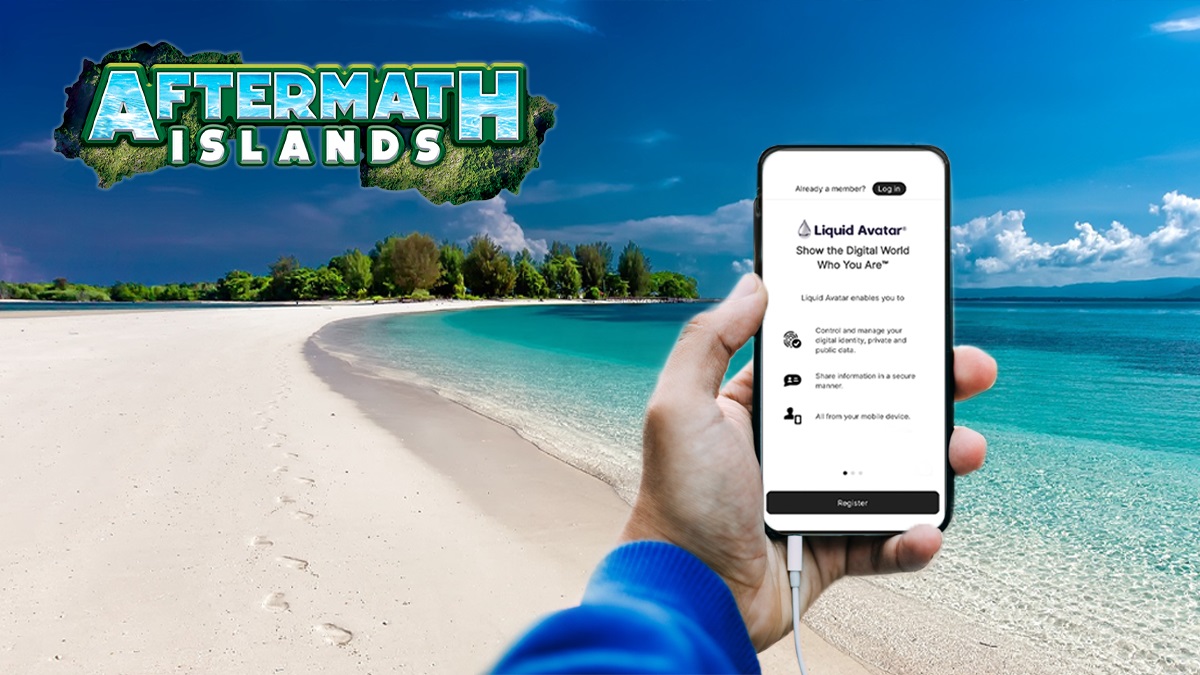 Aftermath Islands Metaverse launched its Liquid Avatar app to replace usernames and passwords with proof of humanity. That means that you will be able to sign into its metaverse apps by using verified face recognition on your smartphone instead of using a normal login.

If it sounds familiar, it’s not so different from Apple using FaceID on an iPhone to recognize your face and log you into your iPhone or your apps. But Barbados-based Aftermath Islands Metaverse, a controlled subsidiary of Liquid Avatar Technologies, is using blockchain-based verifiable credentials to prove who you are without requiring you to divulge sensitive government-issued identity or proof of a home address.

The company has worked for six years on the technology to provide proof of humanity assurances and allow users to establish a digital footprint that shows they are a real person without having to provide other proof, said David Lucatch, managing director of Aftermath Islands, in an interview with GamesBeat.

The goal is to get us ready for the metaverse by creating a high degree of trust or privacy in the Web3 world by establishing one-user, one-account verification. This system has the opportunity to play a much larger role in the emerging metaverse ecosystem supporting interoperability, reduction of fraud and instances of cyber bullying, and potentially creating more effective and efficient business interactions for marketing and engagement, Lucatch said.

It also eliminates the need for username and passwords, using biometric verification instead.

The system is powered by the Liquid Avatar Mobile App, available in most regions around the world, in the Apple App Store and Google Play, with an expanding global footprint. Users can easily create an account and use likeness, device and age verification to establish an individual blockchain-based verifiable credential using W3C principles to create a Meta Park Pass.

“Let’s start with the fact that I don’t think anything can give a guarantee. But what we do is we create a higher level of assurance,” said Lucatch. “That what we’re aiming for. Right now, there is zero level of assurance that anyone is a real person. But the biometric is really the key here. Because at the end of the day, you can’t duplicate that.”

I bounced this off some security experts. Here’s one of the comments that came back from Kim Biddings, vice president of product at biometric security firm BIO-key.

“Aftermath Islands is announcing a form of self-sovereign identity (SSI). SSI, or what some refer to as decentralized identity, gives users full ownership of their digital identity, in place of third-party ownership,” said Biddings. “This concept is nothing new; in fact, SSI has been around for years. SSI protects users against cases of fraud, ensuring that no one can steal a digital identity you own. However, this method is disputed by experts, and user adoption has been minimal over the years.”

And tech analyst Tim Bajarin of Creative Strategies said, “It is similar to Apple’s Face ID but this appears to be designed for cross-platform metaverse apps, which could be good if it works right. My biggest concern is that many metaverse sites, such as Facebook’s Horizon and others, will be walled gardens in a sense and unless this company agreement’s [are extensive], they could be shut out from providing this level of security on other platforms. However, I find the concept interesting and could be a way to help unify how someone enters any metaverse in the future if this is done with proper cross-platform agreements.”

Throughout the evolution of the internet, both individuals and businesses have had great difficulty in establishing trust-based relationships and verification. Federal Trade Commission data shows that consumers reported losing more than $5.8 billion to fraud in 2021, an increase of more than 70% over the previous year.

A study released in July 2022 from Juniper Research, found that the cumulative merchant losses to online payment fraud globally between 2023 and 2027 will exceed $343 billion. According to CBS, major social media networks took down over 1.4 billion fake accounts last year.

The Liquid Avatar Mobile App and Meta Park Pass challenges conventional online wisdom that allows individuals and entities to create multiple user accounts, potentially leading to predatory practices and cyberbullying, aimed towards children and seniors, and fake accounts that pump up user stats inside a platform.

This system works to solve these issues for users and marketers by providing assurances that everyone in an online environment is a “real” person with one user only allowed one account, potentially increasing transparency and confidence to online communities.

Aftermath Islands Metaverse and Lost Kingdom of T’Sara are the first platforms to use this technology, which can be easily deployed to other online games, websites, social media, and ecommerce platforms. Lucatch said his company is talking to a lot of others about the tech, but the company is demonstrating how it works with its own game first.

Without a unique digital footprint for individual users, existing new platforms can suffer the same issues of fraud, identity theft and restricted value capture by platform participants that have long plagued a wide range of other industries, from finance and healthcare to insurance, education, and more.

Of course, the onset of deep fakes means that biometrics might be compromised as well. But Lucatch believes the biometric systems can also be bolstered with other kinds of identification if necessary. Still, for the purpose of playing a game in the metaverse, it might just be enough to do the biometric check. Once you start engaging in transactions, then other kinds of identification may be needed.

If needed, you can move on from the biometric verification to government documents and Know Your Customer (KYC) procedures, which are designed to prevent money laundering.

For game operators, the Proof of Humanity can at least give some assurance that every account being created is operated by a person. The company uses AI to find a confidence level for the identification and whether other verification is necessary. On that front, the company will work with financial institutions. The AI can look at your face and decide whether you are old enough to play the particular game. (China already uses this to restrict how long kids can play a game in a week).

“What we really found at the end of the day was zero identity was not good for anyone,” he said. “KYC and financial regulations can be too much and zero identity too little. We think of proof of humanity as the Goldilocks solution. This is a departure from where we’ve been.”

This kind of tech can make the metaverse more interoperable, Lucatch said, since proof of humanity can be a universal application to sign in everywhere. The app works on Android and iOS, and it works in about 60 countries now. It could work on the PC eventually by using QR code data.

Aftermath Islands will use the Liquid Avatar Mobile App to create additional credentials for exclusive access to events where KYC (Know Your Customer) is required, and new and emerging opportunities in online education, business, gaming and other activities where proof of humanity and identity are required.

“With Web3 and the metaverse, we have an opportunity to change the failures of previous iterations of the internet that failed to provide protection for privacy and data and assurances that only real people exist in an online space,” Lucatch said. “We would never accept this kind of behavior in the real world and we now have the opportunity to create safe and unique spaces that support digital footprints and all types of interactions between people, business and other parties.”

RJ Reiser, CIO of Liquid Avatar Technologies, said in a statement that users can control what they share and with who. They can manage, control and benefit from the use of their digital footprint using the pass and other blockchain-based to verifiable credentials.

“By combining these digital identifiers for participants and players on our platforms and within the growing constellation of digital offerings and virtual platforms coming up around the world, we make it easier for platforms and players to control their data and secure their privacy wherever they operate – virtually or in real life,” Reiser said.

Proof of Humanity is creating a verified database of unique registrants. When combined with solutions from Aftermath Island, these offerings open a wide range of new use cases in multiple domains across virtual and Metaverse experiences, as well as at the intersections of the real and online worlds. These include online gaming, cashing out funds from online wallets, and obtaining real-world services using digital footprint.

The platform is built on the philosophy of decentralization and economic inclusivity and promises to provide captivating experiences that allow people around the world to earn their way into virtual land ownership.

Aftermath Island has about 200 people.

Of course, some companies could be concerned that this face-recognition data would be stolen from the company and combined with other third-party data to identify people. If the company got hacked, that could be a risk. Lucatch said the company had no plans to use the data for advertising.

The company has a privacy team and a compliance team to adhere to privacy laws and regulations.

The work represents a lot of work for a company trying to make a game. But the company has bigger ambitions about Web3 and the metaverse, and it hopes to have a lot of economic value to protect. And if there is a middle ground where you can prove you exist without having to show your private information, then perhaps a lot of users will take that path, Lucatch said.

“We’re trying to get people to level up here,” he said. “This provides an opportunity for everyone to verify not their PII and other personally identifiable information generally, but that they’re still a real person. And you can feel comfortable that when you’re using technology like this, you can get a better deal.”