After Pakistan Blast, China Asks Its Firms There To Step Up Security For Staff 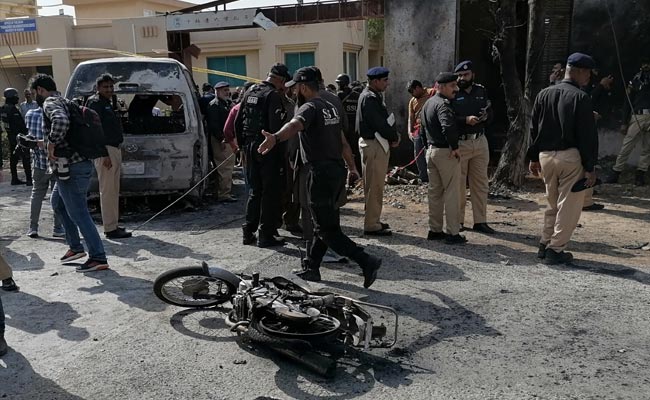 China on Thursday asked thousands of its nationals working on the $60 billion China-Pakistan Economic Corridor (CPEC) projects in Pakistan to increase their security and watch out for terrorist risks following a deadly suicide blast in Karachi that killed three Chinese and wounded another.

“The Pakistani government has promised to strengthen security for Chinese personnel, projects and institutions, and will not allow any force to undermine our friendship and cooperation,” Chinese Foreign Ministry spokesman Wang Wenbin told a media briefing in Beijing.

Asked about the Balochistan Liberation Army (BLA), the separatist group whose woman suicide bomber carried out the attack at the Karachi University targeting the Chinese teachers, warning more attacks if China and Pakistan don’t vacate from Balochistan province, he said, “We believe Pakistan will take earnest and concrete measures to ensure the safe and smooth progress of bilateral cooperation.”

“Once again, we remind our institutions’ personnel in Pakistan to heighten their security awareness and watch out for terrorist risks,” he said.

A woman suicide bomber was seen on the video blowing herself near a shuttle bus used by Karachi’s Confucius Institute occurred on Tuesday afternoon, killing three Chinese teachers and their local driver and injuring another Chinese person.

In a purported video issued by the group, a BLA spokesman said that the motive of the attack was very clear. “It was a simple and clear message to China and Pakistan to withdraw immediately from Balochistan,” said the masked spokesman surrounded by armed men on a hilly terrain.

“Baloch Liberation Army guarantees you the CPEC will fail miserably on Baloch land,” the spokesman, who was holding an assault rifle, said in fluent English.

He warned that a special unit has been formed particularly to attack Chinese officials and installations in Balochistan. The group opposes Chinese investment in Pakistan, especially in the restive Balochistan, saying local people do not benefit.

The CPEC connects China’s Xinjiang province with Gwadar port in Balochistan, providing China direct access to the Arabian Sea. Thousands of Chinese are currently working on scores of infrastructure projects.

The Pakistan Army has formed a separate brigade consisting of thousands of soldiers to guard the Chinese as both the BLA and the Pakistan’s Islamic terrorist group Tehreek-e-Taliban Pakistan (TTP) have carried out numerous attacks.

Wang said, “the Pakistani side is making all out efforts to investigate the attack and apprehend the perpetrator. Terrorism is a common scourge of all mankind. China and Pakistan has the resolve and capability to cut off the claws of the terrorists make them pay the due price.”

State-run Global Times reported that Chinese businesses are ramping up precautions to ensure the safety of personnel and projects in accordance with official guidelines following the Karachi attack.

After the attack, several state-owned companies that are deeply involved in Belt and Road projects in the country told the daily that their local employees are safe and the projects have not been disrupted.

PowerChina, a major participant in the CPEC, said “we have military personnel stationed at our construction sites to guarantee our safety.”

A manager of the Henan D.R. Construction Group, a large construction company with several projects in Pakistan, said the company is reducing outdoor activities, especially in high-risk areas. Certain safety and security measures for personnel and projects have also been strengthened.

The company operates several mining projects in Pakistan, including the Saindak copper-gold mine project in west Pakistan.