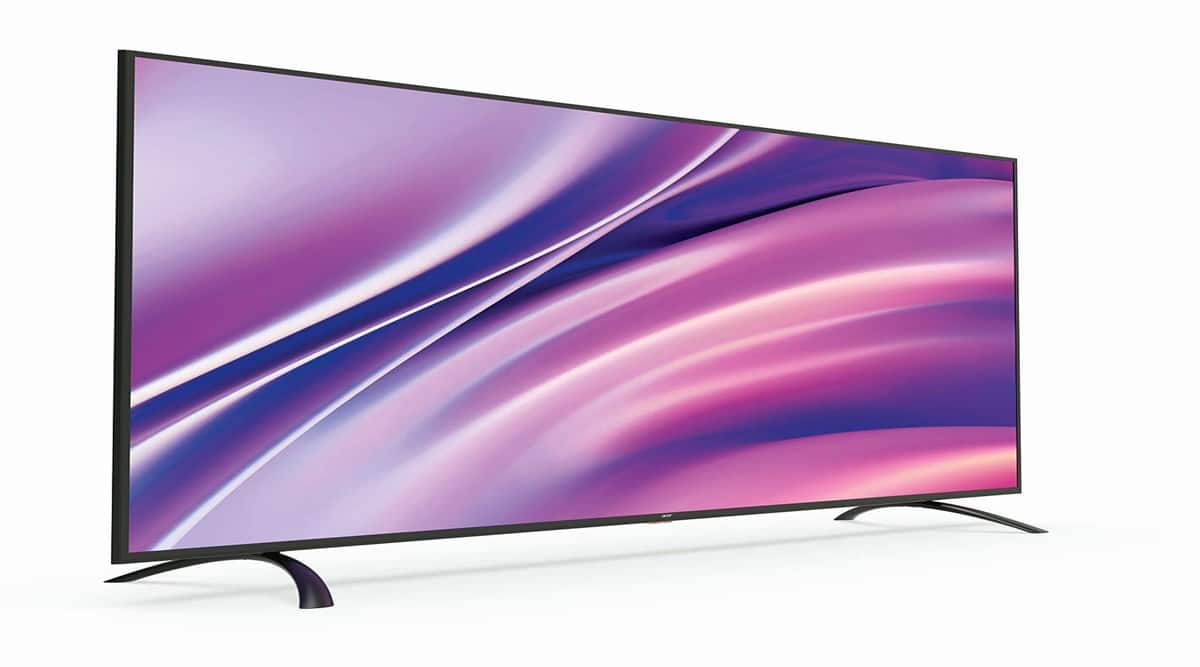 Big screen, great sound effects— nothing beats the joy of watching a movie in cinema halls and multiplexes. Many among us have childhood memories of watching the latest English and Hindi movies in cinema halls when there were no alternatives. Though the sound and picture quality would vary, we enjoyed watching the film on the 70mm screen. The whole experience used to be a treat and an altogether different experience.

Cut to present. The pandemic has greatly disrupted the entertainment industry, no big-ticket films are getting released, people are mostly at their homes glued to their TV sets and mobile phone screens. Recently, this reviewer brought the cinema to his home, courtesy the Acer 70-inch UHD LED TV. The soon-to-be-launched TV (exclusively given to FE for trial purpose) is from the XL Series with a huge screen and sleek & narrow bezels. It retails for Rs 69,999; let’s check out the finer details of this Acer masterpiece.

Taiwan-based Acer is globally recognised for its formidable reputation in the computer industry as the maker of desktop computers, laptops, tablets, among other computing and communication products. It has entered the fast-growing home entertainment segment in India in partnership with Bengaluru-based Indkal Technologies, the latter is the official licensee for Acer brand in India. It is developing a home entertainment product portfolio—televisions, home audios and multimedia devices.

Quite frankly, I was somewhat hassled when the trial unit arrived at my doorstep in a monstrous package, given its 70-inch dimensions and elaborate packaging. Much to my delight, the company officials were kind enough to send across their technician to help me unwrap the Acer TV and set it up in the TV room. I have to admit the entire exercise did not take more than a few minutes and the Acer UHD LED TV had to be mounted on a stand and not wall-mounted, given its body dimensions and weight of 29kg.

Visually stunning and absolutely gorgeous, this Acer XL Series TV has every single component built into its ultra-slim chassis. Our television time has been nothing short of perfect. The visuals are so clear. Who doesn’t watch Netflix and YouTube nowadays? The Acer smart TV makes it happen; it comes pre-installed with Netflix, Prime Video and YouTube apps so the movie experience has been so great at home. What we love about the Acer Android TV is that its remote control comes with the Netflix, YouTube and Prime Video dedicated buttons, allowing you to easily access these apps for quick viewing. Furthermore, it features a Google Assistant button which allows you to control your TV with voice commands. After living with my Sony Bravia for close to a decade, I now know there is such a thing as the TV of my dreams.

The Acer UHD LED TV has a 70-inch big screen with a sleek and narrow bezel. But this smart TV does not take up much space. Instead, it adds that luxurious touch to your modern, contemporary home. The resolution is 4K UHD—3840 x 2160, 1.07 billion colours, contrast ration of 6000:01 and 500 nits brightness. There is Dolby Audio, Pure Sound 2 built in and speaker output is 24W. Equipped with such a formidable spec sheet in the visual and audio department, you can be assured of a cinematic experience for your movie nights at home.

I watched a vast collection of 8K videos of wildlife animals, plenty of Hollywood blockbusters such as Gladiator, Cast Away and Avatar and the visuals are simply breathtaking,with the richest colours, deepest blacks, and one of the most realistic picture qualities. There is plenty of eye comfort for longer hours of viewing. Combined with the TV’s rich and advanced audio features, watching movies at home is now simply breathtaking.

Furthermore, with Chromecast built-in, you can easily cast your devices’ content (phone, tablet, or laptop) onto the TV to watch on a larger display, without suffering from loss of output resolution. The advantage of the the TV’s Android Pie OS (the system will be directly updated to Android 11 via OTA) is that you have access to thousands of apps via the Google Play store.

Key takeaways: The Acer UHD LED TV has impressive picture quality, it produces bright, vivid visuals, making movie-watching absolutely surreal. There is great audio too. Overall, it is a great smart TV, whether for movies, sports or general Net browsing. It is super stylish and will look great in any modern home, and hence finds a strong recommendation.